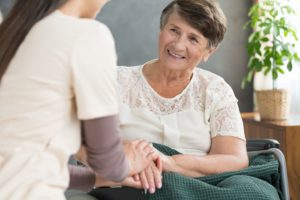 We have all heard stories about someone we know who was seriously injured by a slip-and-fall and worried about whether or not it would be us next. The sad truth is the risk of injury after a fall only increases as we age and can be doubly as likely if we also suffer from cognitive impairment such as Alzheimer’s. Due to the toll that diseases like dementia take on our ability to perform everyday tasks, lowering the risk of a fall by any means is incredibly important.

It has been noted in the past that those who suffer from dementia are twice as likely to experience a fall as those without it and nearly 60 percent of those with the condition have a slip-and-fall each year. Some researchers claim that the type of symptoms a person experiences with dementia can predict whether or not they will be one of the unlucky ones to slip and fall.

The participants represented a wide range of stages of dementia, as well as neuropsychiatric symptoms. The experimental group for the study was asked to participate in a new exercise program specifically designed for older patients with Alzheimer’s disease. The results of the research showed that those who participated in the exercise program had a lower risk of falling down and hurting themselves than those who suffered from dementia but did not exercise. They also found that the participants with lower scores on the psychological testing, indicating advanced cognitive and neuropsychiatric symptoms, and who did not exercise had the highest risk of experiencing a fall.

The researchers believe that the results of the current study confirm their predictions that patients with Alzheimer’s disease who present with neuropsychiatric symptoms, such as depression and anxiety, are at a higher risk of suffering a slip-and-fall than the normal population and that exercise can reduce the risk of falling for these patients.