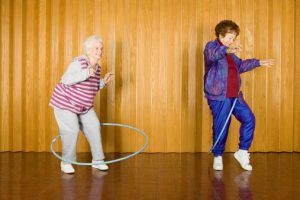 A new study from the University of California, San Diego, has found that elderly women who sit for a minimum of 10 hours daily and get little to no exercise have cells that are biologically older than their more active counterparts.

Elderly women who get less than 40 minutes of moderate exercise and are sedentary for approximately ten hours daily have shorter telomeres that are associated with older cells. Telomeres are small caps on the end of DNA strands meant to protect the chromosomes, and as you age, these caps get shorter and deteriorate. The telomeres found within the cells of the women studied revealed that at a biological level, those who led a mostly sedentary life were on average eight years older than those who remained active.

These shortened telomeres come with a host of potential risk factors and are linked with diabetes, cardiovascular disease, and even some major cancers. The women tested were part of a large existing study known as the Women’s Health Initiative, which focuses on observing the determinants in post-menopausal women of chronic diseases.

Approximately 1,500 women between the ages of 64 and 95 had their movement tracked using an accelerometer that was worn 24 hours a day for a full week. The results showed that the key to maintaining telomere length was not reducing sitting time, but increasing exercise and movement.
Lead author of the study, Dr. Aladdin Shadyab addressed this, stating “We found that women who sat longer did not have shorter telomere length if they exercised for at least 30 minutes a day, the national recommended guideline.”

These findings show that even if an individual spends a large amount of time being sedentary, exercising for the recommended 30 minutes a day can prevent premature biological aging. It is important to note the limitations of this study, as the population studied was limited to elderly women and cannot be applied to the general population without further research.

The Healthy Truth: My favorite exercises for a full-body workout

Baby boomers and Alzheimer’s disease: Effect of aging on memory