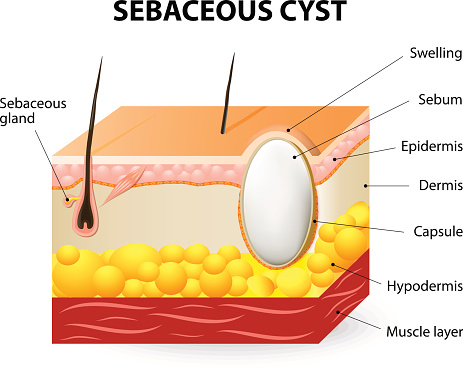 A sebaceous cyst is a noncancerous lump behind the ear, which develops underneath the skin, and while it can be unsightly and sometimes uncomfortable, it’s generally not harmful.

Usually a lump behind the ear, a sebaceous cyst can also show up on the head, back, face, breast, and other parts of the body. They tend to appear most often on the face, neck, and trunk. They are small or large.

Some people who get a sebaceous cyst find that they have no problems with it and require no treatment, but in some situations the cyst can rub up against clothing or other body parts, can rupture or get infected, causing discomfort. In certain cases, a person may decide to have a cyst surgically removed.

Sebaceous cysts are made up of dead skin cells and oil produced by oil glands in the skin. Behind the ear lobe is the more common place to find a sebaceous cyst, but the bump can also be found in the ear canal. Some doctors suspect that their patients get reoccurring cysts because oils are being produced in a skin gland faster than they can be released from the gland.

The oil gland is called the sebaceous gland, hence the name of the cyst.

Both medical scientists and dermatologists continue to investigate the causes of sebaceous cysts, but what we do know is that the surface of our skin, called the epidermis, is made of layers of thin cells that are always shedding. Cysts form when these cells move deeper into our skin and multiply instead of falling off. These cells form the walls of the cyst. Inside the cyst is a protein, known as keratin. A thick, yellow substance will drain sometimes from a person’s cyst – and that is actually the keratin. Research tells us that the epidermal cell growth is due to a damaged hair follicle from the oil gland in the skin.

People often confuse an epidermoid cyst with a sebaceous cyst, but experts at the world-renowned Mayo Clinic suggest that these are two different types of cysts. They say sebaceous cysts develop from glands that produce oily matter that lubricates hair and skin. The sebaceous gland secretes a mix of fats that include, triglycerides, cholesterol, and wax esters (a fatty acid).

Signs and symptoms of sebaceous cyst 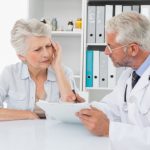 Since most sebaceous cysts behind the ear are not painful, people don’t notice them. For others, though, sebaceous cyst symptoms can be bothersome.

If you have a cyst and notice that it is growing quickly, suddenly ruptures, becomes infected, and/or is painful, you should see a doctor. You should also seek advice from a physician if the spot that the lump is in starts to irritate you or bothers you for cosmetic reasons.

Sebaceous cyst removal can involve a surgical technique or a laser technique, but doctors are careful to point out, especially in cases where the removal is strictly for cosmetic reasons, that both of these techniques have the potential to leave a scar.

Sebaceous cysts treatment is often done right at home because the lump is noncancerous, isn’t painful, and in most cases doesn’t cause any real problems.

While many people are tempted to try to pop or squeeze a sebaceous cyst, like they would with a pimple, this is discouraged as it could increase the chances of infection. Instead, some of the best examples of sebaceous cyst treatment involve simple, natural remedies.

Check out the following list of home remedies for sebaceous cysts:

One of the easiest and most effective treatments for sebaceous cysts is using a hot compress. It helps drain the pus and liquid out of the cyst, causing the lump to shrink. If you plan on trying this method, you should make sure that the compress is not very hot. Otherwise, you can burn yourself or generate more infecting bacteria.

Homeopaths have a long list of natural remedies that they suggest to their patients with sebaceous cysts. Some are listed below. If you plan on trying a homeopathic medication, it is important to make sure it does not conflict with any other medications or supplements that you are taking. 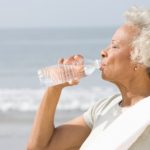 It is not unusual for most people to get a sebaceous cyst at some point in their lives. Although they are harmless for the most part, they can be annoying, and nobody really wants to have one on their body.

There are ways to lessen the severity of a sebaceous cyst and to prevent it. All it takes is a few easy steps.

Sebaceous cysts can be a nuisance, and if they appear on the face or neck they can make a person feel self-conscious. Putting some preventative measures in place can significantly reduce the chances of getting unsightly cysts. Besides, the simple health and hygiene tips above are important for overall good health.

While it is okay to address a sebaceous cyst on your own, if the tips above don’t seem to be helping and you have a cyst that just won’t go way or is painful, it is important to seek medical attention rather than take a stubborn lump into your own hands.