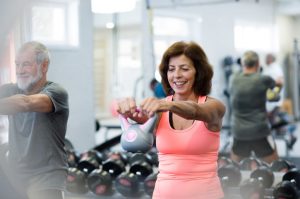 As we age, we tend to become weaker as we may be less active and consume less nutrient-rich foods that help build muscle. Furthermore, muscles among seniors become smaller and weaker, which can ultimately lead to frailty and disability.

Muscle weakness with aging is inevitable, but the process behind this hasn’t been fully understood – until now.

A new study has uncovered that muscle wasting may be a result of changes in the nervous system.

Researchers from Manchester Metropolitan University and The University of Manchester in the UK and University of Waterloo in Canada used MRIs to get detailed images of muscle tissue. By the age of 75, there are typically 30 to 50 percent fewer nerves controlling the legs. This disconnect between the muscles and the nervous system ultimately makes these muscles useless, which causes them to waste away.

On the other hand, healthy muscles can ‘save’ other muscles by sending out new nerve branches. This can only protect some muscles, but it can slow down muscle wasting. Excessive muscle loss is known as sarcopenia and it’s estimated to affect 10 to 20 percent of people over the age of 65.

The researchers used enhanced electromyography to record electrical activity passing through the muscles to develop an estimate of active nerves that could save other muscles. It is still unclear as to why some people have more active nerves than others, but having an understanding between muscles and the nervous system may help develop treatments to reverse muscle loss in aging.

Senior author Jamie McPhee explained, “Our challenge now is to find ways to increase the success of nerve branching to rescue detached muscle fibers and thereby reduce the numbers of older people in our neighborhoods with low muscle mass and muscle weakness.”

Fellow researcher Mathew Piasecki added, “One of the earliest attempts at research similar to ours showed results from a small group of older people who apparently had just a couple of surviving nerves feeding into a foot muscle. When we started out with our research, we were very skeptical of the old data and thought it was an anomaly of out-dated testing procedures. However, now that we have tested a couple of hundred men we think the early observation was probably correct.”

Additional research is required to not only obtain a better understanding between muscles and the nervous system but also to uncover interventions that may be effective at reducing muscle loss with age.

In the meantime, it is advised that people of all ages maintain muscle mass through eating healthy and regular exercise.