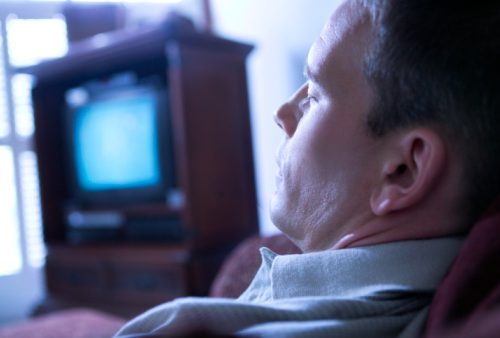 Just last year the journal of Human Reproduction reported that reproductive male health around the world is in sharp decline. The statement was made following a study in France that found sperm count in men fell by a third over a 20 year period. Today Harvard researchers believe one of the biggest contributing factors is watching TV.

What This Means for Male Health

Just what exactly is low sperm count? According to the Mayo Clinic your count is officially low when you have fewer than 15 million sperm per milliliter of semen. If you have low sperm count it can make it difficult to fertilize an egg to conceive a child with your partner. Lower sperm count has also been associated with prostate cancer, testicular cancer, and cardiovascular difficulties.

The Cause of Low Sperm Count

For some time now medical researchers have been trying to determine the causes of low sperm count. Aside from medical problems such as infection or tumors, theories have included exposure to environmental toxins, exposure to radiation, prolonged emotional stress, smoking, drug and alcohol abuse, as well as obesity. This latest study points to sedentary behavior.

During the research close to 200 men; the majority college students were asked a number of questions related to their lifestyle, such as eating habits, physical activity, and stress levels. Each participant also provided a semen sample for analysis. It turns out the couch potatoes didn’t fare so well. Men who exercised more than 15 hours per week had 73 per cent higher sperm counts than men who took part in less than 5 hours of physical activity per week. Men who watched more than 20 hours of TV had a 44 per cent lower sperm count than those who watched little or no TV at all. The researchers eliminated 2 risk factors; smoking and obesity, as contributing factors among the participants.

The Harvard Study on Sexual Health

Now that the Harvard study has linked sedentary behavior to sperm count, medical experts are asking why? Some scientists speculate that exercise produces more antioxidant enzymes that prevent oxidative stress. Oxidative stress is what normally damages cell membranes in the body. It is believed that this damage can also impact the creation of new sperm cells. Other theories on male health and reduced sperm count due to sedentary behavior are more controversial. For example, some believe that men who watch too much TV just might be squishing their scrotums in the way they are sitting, making that area of the body too hot to produce new sperm. Some studies suggest that sperm production slows if the scrotum temperature rises 1.8 to 3.6 F (1 to 2 C) above normal body temperature.

Those who study male health say there is no need to be alarmed if you are a man who likes to watch TV. In fact, urologists point out that this study doesn’t say a lot about the main reason men worry about low sperm count; their sexual health or specifically, fertility. In order to determine true fertility, more than one sample of semen is required along with detailed blood work. Most doctors do agree that it is important for fertility, as well as good health overall for people to get up and get moving.