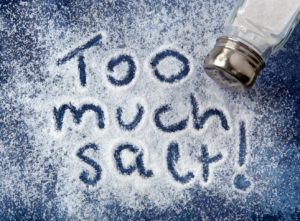 In what is being seen as a long-awaited move, the NYC Board of Health is making it mandatory for New York City restaurants to have salt warnings on their menus. The warnings are expected to persuade New Yorkers to go for healthier ‘less salt’ options and encourage healthy eating.

New York will be the first city in the entire nation to make ‘salt warning’ menus compulsory. These menus will alert diners if a particular dish has more than the recommended daily limit of 2,300 milligrams of sodium; going over that threshold increases heart health risk and even stroke risk.

Other health risks of a high sodium diet

Starting December 1st, 2015, menus will feature an image of a salt shaker in a triangle next to items that exceed the recommended salt content.

According to Health Commissioner Mary Bassett, “This is a great day for New York, and a real step forward for public health.” Bassett knows for a fact that many people don’t even know their food is high in sodium, and she feels these labels will serve as an important guide for people to make healthy choices in restaurants.

However, the rule applies only to chain restaurant, bars, theatres and other food establishments with at least 15 or more locations across the country. The following list gives a fair idea of how much extra salt diners are forking in on a daily basis.

As with any new health law, this one too has its fair share of detractors. Not surprisingly, most of these detractors come from the food service industry. Matthew Greller, a lawyer for the National Association for Theater Owners, said that when the health department makes rules up, it creates a bad precedent. He believes such laws and blanket recommendations should ideally come from lawmakers.

Greller is the same lawyer who was involved in the successful lawsuit against the Bloomberg administration to stop the big soda ban. He believes that as there is a cost involved in changing menus, some theatres might just stop selling salty pretzels – which have more than the recommended salt content – rather than change their menus.

No decision has yet been made on the legal action for defaulters.