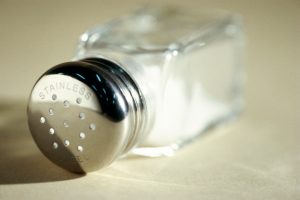 The Centers for Disease Control (CDC) report that more Americans, about half of all surveyed, are watching their sodium intake.

The CDC surveyed 180,000 people from 26 states, and found that those with high blood pressure were more likely to give up salt.

Current guidelines of salt intake for Americans are one teaspoon, or 2,300 milligrams. Those aged 51 and over – and especially those suffering other health concerns – are recommended to consume less than 1,500 milligrams.

These new findings suggest the message of lowering sodium intake is working and Americans are taking note – but it may not be as clear in different states. For example, 58 percent of respondents in North Carolina responded “yes” to lowering sodium. But in Utah only 39 percent agreed.

Researchers did note that within states where respondents had the highest blood pressure, individuals were making the biggest improvements in lowering their sodium intake.

The CDC recommends that health care professionals need to continue to inform patients about the hazards of salt, as doctors are a trusted source for people. By reducing salt intake not only will incidences of heart disease and stroke be lowered, but the American health care system would also see a reduction in costs associated with these types of illnesses.

The study was published in the CDC journal Morbidity and Mortality Weekly Report, on July 3 2015.