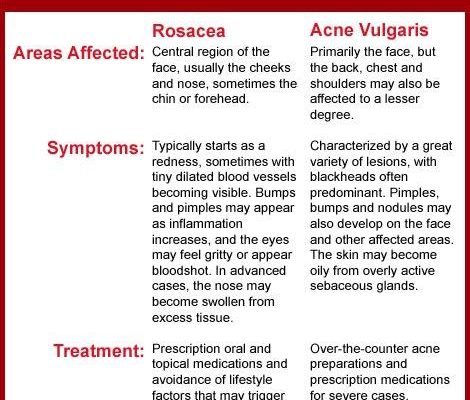 Almost everybody has gone through the pangs of acne where the face is covered with small, hard pimples and looks very red, shiny, and inflamed. However, if these traditional acne symptoms are accompanied by painful bloodshot eyes, veins on your face, and an absence of blackheads, then what you might be suffering from is not acne, but rosacea.

From a distance, rosacea and acne look very alike. In fact, rosacea is so similar to acne vulgaris (the proper name for acne), that it is often referred to as acne rosacea. Not surprisingly, many young dermatology students often ask the question – Is rosacea a type of acne? The answer is, no.

Though rosacea is remarkably similar to acne, it is actually completely different and has its own unique symptoms and causes. Because of this similarity and difference, thousands of people who attempted to cure their acne have been left frustrated.

To avoid this confusion and to ensure better management and treatment, it is important tell one from the other. The recent discoveries of their very different mechanisms of action allows for better therapeutics, especially where antibiotics are concerned.

The main symptoms of acne are pimples, cysts, whiteheads, and blackheads, all over the face.

While a rosacea patient too manifests many of these symptoms, there are many key differences between acne vulgaris and acne rosacea.

For example, rosacea is a chronic disorder that usually shows up in the central portion of the face and is symptomized by redness, flushing and blushing, and bumps (papules) and pimples (pustules). Rosacea can also result in a bulbous nose (rhinophya) and even involve the eyes.

While acne is seen most commonly in teens, rosacea usually occurs much later.

Also, unlike in patients with rosacea, acne patients have blackheads, and sometimes even bumps and pimples on the trunk and arms.

Acne can be caused by many factors that cause blocking of hair follicles, hormonal stimulation of oil gland cells, and bacterial infections. Rosacea, on the other hand, appears to be linked to a defect in the body’s natural immune system.
A recent NRS survey revealed that the top two symptoms of rosacea — flushing and persistent redness— are closely followed by bumps and pimples of subtype 2 rosacea to make up for the top three symptoms of the disorder.

Unfortunately, most of the respondents refer to subtype 2 rosacea as “acne rosacea.”

If you suspect you might be experiencing signs of subtype 2 rosacea, the chart below may provide a quick and easy reference to help distinguish between rosacea and acne. 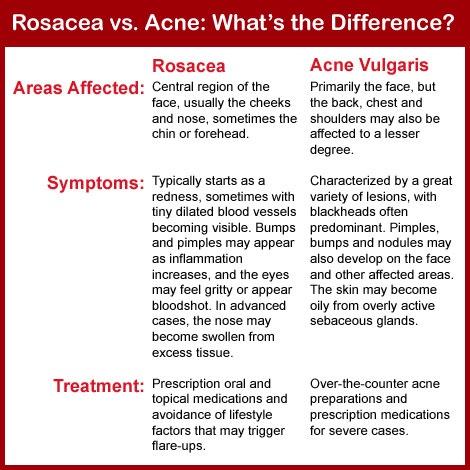 Rosacea vs. acne: Prevalence in U.S.

The prevalence of rosacea seems to be on the rise in the United States. However, insufficient epidemiological data on this condition means that rates range from as little as 0.09 percent to as much as 22 percent. One of the reasons could be that the condition often goes undetected in dark-skinned people until a later stage where complications such as conjunctivitis and blepharitis (eyelid swelling) come into play. The other reason could be the fact that most of the studies may understate the true incidence of rosacea because they only look for the signs and symptoms at the time of the study, while the rosacea at the time of the study could be in a dormant state.

Rosacea is most common between the ages 30 and 50 years. Women outnumber men three to one, though in menopausal women the risk goes up even further.

Type 2 rosacea was the most prevalent in American women, compared to other ethnicities.

Earlier, the National Rosacea Society (NRS) had estimated the number of rosacea sufferers in the United States to be at 14 million, but recent epidemiological data suggest the incidence may be much higher.

It is now estimated that 16 million Americans suffer from the signs and symptoms of rosacea, and millions more may be in temporary remission.

Even though these incidence rates are very high, rosacea tends to be more common in fair-skinned individuals, and an assessment of rosacea in the U.S. must take into account the diversity of its population.

The good news is, although the incidence of rosacea has increased in the United States, awareness of the disorder has been rising steadily.

Acne is the most commonly occurring skin condition in the United States, affecting up to 50 million Americans annually. While it can occur at any stage of life, acne usually begins in puberty and affects many adolescents and young adults. An estimated 85 percent of people between the ages of 12 and 24 experience at least minor acne.

The U.S. prevalence of severe acne is virtually nil in the first decade of life, but increases in a linear fashion from 11 years to 17 years of age. Severe acne was more evident in Caucasians, compared with other racial groups, at age 14–15 years in boys and 11–13 years in girls. Severe acne is associated with a number of coexisting health conditions like sinus infection, sore throat other than strep infection, asthma, non-asthmatic lung disease, reflux and heartburn, abdominal pain, nausea and vomiting, food and digestive allergy, depression, anxiety, attention deficit disorder, and insomnia. Acne is a huge drain on our medical resources with cost of treatment going north of three billion dollars.


Difference between rosacea vs. acne: Causes and risk factors

In spite of many studies, the cause of rosacea is yet unknown, but researchers believe a combination of environmental and genetic factors play a huge role.

Having said that, a number of factors can trigger or aggravate rosacea by increasing blood flow to the surface of your skin. Some of these factors include:

According to a survey by the Mayo clinic, even though anyone can develop rosacea, the chances of developing the condition are more if you:

While that is the basic pathology of acne formation, there are other triggers that can aggravate flare-ups of acne. The most common triggers are

However, in a stark departure from popular myth, greasy foods, dirty skin, and cosmetics are not the real cause of acne. Though they might help progress acne and prevent it from being resolved.

Because of the nature of the condition, many of the causes of acne also double up as risk factors. The common risk factors are:

Rosacea vs. acne: Diagnosis and treatment

Rosacea and acne together contribute to more than 60 percent of skin care medication sold in the U.S. However, the outcomes are very different for the two conditions.

There is no cure for rosacea. The primary goal of treatment is to control the redness, inflammation, and skin eruptions. The biggest key to controlling rosacea is to avoid triggers — factors that cause the skin to flush (see triggers of rosacea above).

Proper skin care will go a long way in managing rosacea. The use of very mild skin cleansers and high-quality, oil-free cosmetics is recommended. A sunscreen with broad spectrum coverage will help prevent symptoms triggered by sunlight.
If these measures aren’t enough, long-term treatment with oral antibiotics has been shown to control skin eruptions and curb the progression of rosacea. A simple culture sensitivity test will help determine which antibiotic is best suited for your rosacea. But please remember, as there is no permanent cure for rosacea, treatment might be prolonged and may often go into months, even years.

In severe cases with complications, like visible veins and rhinophyma, laser surgery may be indicated for cosmetic reasons.

On the other hand, there are many treatment and management strategies for acne vulgaris. Options might vary from topical to oral medications.

Topical medications work best when applied to clean, dry skin about 15 minutes after washing. You may not see the benefit of this treatment for a few weeks. And you may notice skin irritation at first, such as redness, dryness, and peeling.
Oral medications (antibiotics) work by killing excess skin bacteria and reducing inflammation and redness.

Sometimes, the doctor may prescribe a combination of oral and topical therapy.

Acne medications work by speeding up skin cell turnover, reducing oil production and inflammation, and fighting bacterial infection. Most prescription acne drugs show good results after four to eight weeks, but in some cases it could take longer (even years) for your acne to clear up completely.

Combined oral contraceptives. The Food and Drug Administration has approved the use of combined estrogen and progestin (Ortho Tri-Cyclen, Estrostep, and Yaz) for the treatment of acne.
In addition to the above medications, certain therapies are used either alone or in combination with the medication to get relief from acne. Some of these therapies are:

But the one thing that is most important for the young adults to know is to accept acne as a part of growing up and not fret over it too much. A healthy lifestyle where the body is being well hydrated and nourished with healthy foods goes a long way in keeping down the acne. Remember, the more you stress, the worse your acne can be. So relax, let nature take its course, and within a few years your acne will be a thing of the past. And whoever said that beauty is only skin deep didn’t know what they were talking about. The real beauty is within. And no acne can do a thing to spoil that beauty.

Lupus vs. rosacea, differences in symptoms, causes, and treatment

Lupus and rosacea rash may look similar, but they are, in fact, separate conditions that require different treatments. People often think that rosacea is a symptom of lupus. There are many symptoms associated with the autoimmune disease, and a rash on the face is one of them. Continue reading…

By the time you hit puberty your hormones were wild, your voice changed and tiny red spots have appeared all over your face. How embarrassing were those days when a new pimple could just spring up at any moment and put you in a tailspin! Continue reading…