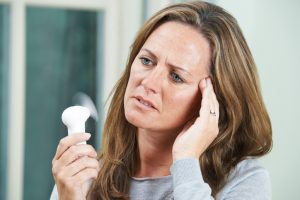 When we talk about women’s health, we almost inevitably touch upon the subject of menopause. Although many women may be relieved they don’t have to experience their monthly period any longer, menopause comes with its own set of unpleasant symptoms, too.

And hot flashes, night sweats, and hormonal fluctuations aside, menopause is also believed to be speeding up aging, according to a recent study.

Researchers from UCLA tracked the DNA changes in cells of menopausal women to determine their biological age – compared to their actual age. Senior study author Steve Horvath said, “What we found was that for every eight years of difference that a woman enters menopause earlier, there’s a one year increase in biological age.”

Horvath and his team looked at DNA samples from over 3,000 women enrolled in four long-term studies. The analysis revealed that menopause sped up cellular aging by an average of six percent. This is how Horvath explained the aging process, “…a woman … enters early menopause at the age of 42. Eight years later, she would be a full year older biologically than another 50-year-old woman who entered menopause at age 50.”

Although Horvath noted that this is not a drastic change, it could be enough to increase a woman’s risk of early death.

You can’t avoid menopause. But what you can do is make sure you get proper sleep. Another study from UCLA found that insomnia and poor sleep can accelerate cell aging, too. Controlling the contributing risk factors such as sleep quality may help slow down the acceleration of aging triggered by the menopause.