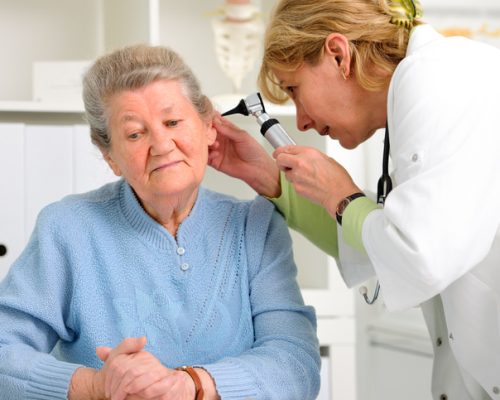 Even if you don’t suffer from hearing loss now, a new study suggests that the older you become the higher your risk will be. Hearing loss is becoming such a widespread problem in the U.S. that new tactics need to be implemented to ensure more people are receiving treatment in time.

Hearing loss is common in old age, but despite the variety of treatments available to improve one’s hearing and quality of life, many seniors are not speaking to their doctors about their options.

The study included 647 seniors over the age of 80 who all had some level of hearing loss. Those over the age of 90 were most affected. Team leader of the study Dr. Anil Lalwani said, “Hearing loss accelerates with age in the oldest old, a population in which hearing aids are vastly underused despite their great potential benefit.”

The exact number of Americans suffering from hearing loss is largely underestimated, because many cases go unreported and many seniors never speak to their doctor about their hearing concerns.

The research team compared rates of hearing loss in adults aged 80 to 106. The participants were divided into four groups based on their age.

Hearing loss was found to be the most progressive among those of older age. Dr. Lalwani explained that it “is associated with numerous deleterious psychosocial, functional, and cognitive effects. It is a major public health concern as the population of individuals over the age of 80 is expected to double in the next 40 years.”
Of the study group, only 59 percent of participants used a hearing aid. “Hearing aids are underutilized in this population, despite the fact that hearing aid use has been shown to improve the social, functional, and emotional effects of hearing loss,” Dr. Lalwani added.

The researchers suggest that hearing loss should be treated as a chronic condition, but Dr. Maseih Moghaddassi, chief of otolaryngology at Winthrop University Hospital in Mineola, suggests, “On one hand, the insurance carriers may begin to bear some of the cost of a hearing aid. On the other hand, our Medicare system is so overstretched and this may take resources away from some other lifesaving procedures such as dialysis or cardiac surgery. I think it is time for our society to make some tough choices.”

Until a solution is found, the researchers do recommend routine hearing tests for older patients to monitor their hearing.