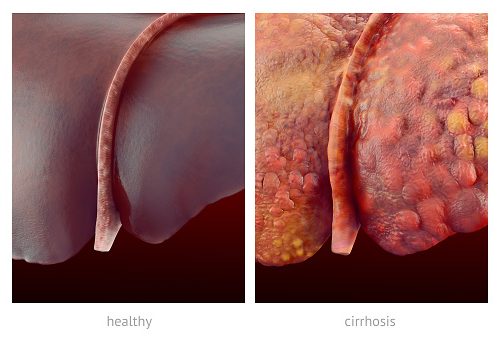 Liver fibrosis is scarring of the liver and is an irreversible condition where healthy liver cells become replaced with scar tissue, which ultimately leads the liver to malfunction. Researchers at the Salk Institute have identified a molecule, known as JQ1, to halt fibrosis from occurring. In animal studies it not only stopped scarring, but reversed fibrosis.

Investigator, Ronald Evans, Ph.D., said, “After too much damage in the liver, the scar tissue itself causes more scar tissue. We can actually reverse liver fibrosis in animals and are now exploring potential therapeutic applications for humans.”

When the liver becomes damaged, hepatic stellate cells are what go to work to heal the wound. These cells commonly store vitamin A, but when they go to heal liver damage they release vitamin A and tend to the injured area to create a thick wall of scar tissue in order to repair the damage. Over time, chronic stress causes healthy liver cells to become replaced with scar tissue, which contributes to organ failure.

Senior author, Michael Downes, Ph.D., said, “Traditional therapies targeting inflammation don’t work because these cells have multiple ways to bypass the drug. In contrast, our strategy was to stop the fibrotic response at the genome level where these pathways converge.”

The discovery of JQ1 came after exploring a regulatory protein known as BRD4. JQ1 was found to inhibit BRD4 and stopped the hepatic stellate cells from forming scar tissue. This discovery offers hope that JQ1 can be used in future treatments as a means of reversing liver fibrosis.

Dr. Evans concluded, “Our results indicate that BRD4 is a driver of chronic fibrosis and a promising therapeutic target for treating liver disease. We think this discovery may also treat fibrosis in other organs, like the lung, pancreas and kidney.”