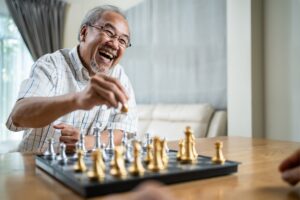 Why do some people stay as sharp as knife into their 80s and beyond while so many others notice their memory slipping?

A new study suggests it could have something to do with size of their brain cells.

The work focused on “super agers” – a select group of elderly adults who have the memory skills of people decades younger.

Researchers found that in memory-related areas of the brain, super agers had larger neurons than elderly adults with average brain power; the same was true when compared to people 30 years younger.

They also found that these big brain cells were free of “tau tangles,” one of the key indicators of Alzheimer’s disease. In healthy brain cells tau proteins help stabilize the brain’s internal scaffolding. When they become abnormal, they cling to each other.

People with Alzheimer’s tend to have a large accumulation of tau tangles, as well as amyloid plaques, caused by another protein called amyloid.

What separates super agers, aside from the size of the brain cells, is the lac of tau protein buildup. Interestingly, the super ages had no less amyloid buildup than anybody else, suggesting that tau may play a more important role in memory loss and dementia than previously thought.

These results tend to reinforce the idea that dementia and Alzheimer’s are not inevitable.

Super agers are not fully understood. No one really knows how many there are, who they are, and why their brains seem to resist age-related decline. It is likely a mix of good genes and lifestyle factors.

Of course you can’t really control the size of your brain cells. But you can do other things that are associated with slower rates of mental decline. Eating a healthful anti-inflammatory diet, staying active, socializing, and stimulating your brain can all help.