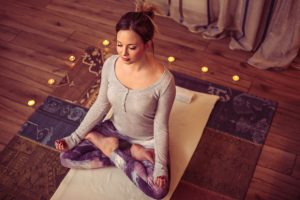 Those who suffer from depression may find better relief of their symptoms on a yoga mat, according to a new study from Boston University Medical Center.

Major depressive disorder (MDD) is a chronic, recurrent, and disabling condition that is prevalent worldwide and is responsible for more years lost to disability than any other disease. As much as 40 percent of patients that are treated for depression with antidepressant medications do not achieve full remission, prompting researchers to explore alternative treatment options. This study analyzed the effect of Iyengar yoga—a form of yoga that focuses on detail, precision, posture, and breath control—on the symptoms of those with major depressive disorder.

These findings support the notion that depressive symptoms can be managed with non-pharmacological treatment methods, either as a replacement for or in addition to pharmaceutical interventions. Yoga may be a safe addition to an existing treatment regimen as patients do not need to worry about adverse side effects or drug interactions.

Six more reasons why you should be taking yoga