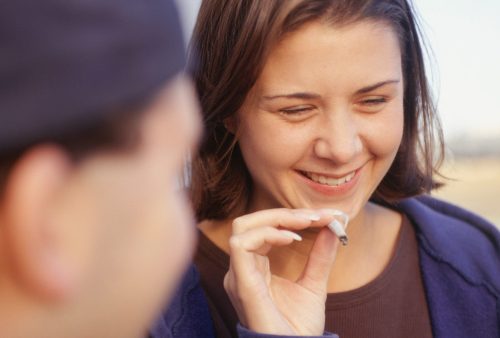 Marijuana use is a decisive topic today with many people in favor of it or completely opposed to its use in any form. While it has proven itself to have many beneficial properties in the field of medicine, perhaps it may also increase your sex life. A new study has found that regular marijuana users are having more sex.

The study in question saw an overall trend no matter the sex, race, age, education level, level of income, health status, religion, marital status, or whether there were kids or not. However, the researchers stress that their study did not establish a causal relationship between marijuana use and sex, but rather that users are just having more sex.

This study is the first to examine the relationship between marijuana use and sexual frequency in the United States. It is currently estimated that about 20 million American adults use marijuana, with this number expected to climb as more states begin to legalize the substance.

This observation conflicts with many of the previously thought, yet ambiguous status that marijuana has on sexual function. Some reports state that its use can cause erectile dysfunction in heavy users and even reduced sperm counts. However, other studies have found that marijuana use stimulates the sexual activity and arousal regions of the brain.

The study in question used the National Survey of Family Growth, sponsored by the Federal Centers for Disease Control and Prevention, to reach an accurate determination of the effects of marijuana and the frequency of sexual intercourse. The survey explicitly asks how many times one had intercourse in the past four weeks. Additionally, it inquiries about their frequency of marijuana consumption over the past 12 months.


Data from over 50,000 men and women was collected for all years since the survey first began in 2002. Respondents included in the study were between the ages of 25 and 45 and were excluded if they failed to answer one or more relevant questions.

Proof in the numbers

Women denying marijuana use in the past year had sex on average 6.0 times during the previous four weeks. This was in contrast to 7.1 times for daily marijuana users. The data for men found that non-users had intercourse 5.6 times in the same time frame, while daily users had 6.9 times.

According to this study, marijuana users are having 20 percent more sex then non-marijuana users.
This trend remained even after accounting for other drug type use, such as alcohol and cocaine. It was also seen that the effect was dose-dependent, with sexual activity rising with increased marijuana use.