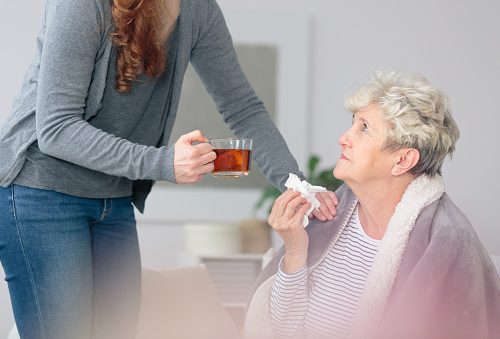 The flu is an infectious disease caused by the influenza virus. It is more than just a simple cold but is often pegged as such. Those affected by the flu have more than just a runny nose and fever, as symptoms are far more intense, with the increased risk for developing respiratory disease.

There is no demographic more at risk for succumbing to the negative effects of the flu than the elderly population. A new study of the influenza virus from researchers at Yale School of Medicine helps to illustrate this point, finding that aging impairs the immune system’s response to the flu virus in more ways than one.

The flu can be a devastating infection and sometimes deadly when affecting particular demographics. It is characterized by fever, cough, and body aches, with older adults, young children, pregnant women, and those with chronic health problems at higher risk of serious complications.

It is estimated that between 5 to 20 percent of the U.S. population will get the flu every year. Worldwide, influenza is estimated to kill roughly 250,000 to 500,000 annually, according to the World Health Organization.

The study in question led researchers to collect blood samples from healthy young adults and older adults aged 65 and above. Their goal was to investigate the innate or inborn immune response that the body had the flu virus. White blood cells involved in fighting off infections were isolated from each blood sample and stimulated with the flu virus to see they would react.

Reduced immune response in the elderly

The researchers believe that without this signaling process, along with other involved antiviral genes, resistance to the flu falls short.

“In older adults, we might have to use a different strategy to treat and immunize against flu. We need to find a way to boost the antiviral defense that does not rely on interferon production. For vaccines, we need to find an adjuvant – a component added to a vaccine – that would still stimulate the innate immune response in older adults,” said Iwasaki.

This study provides new insight into the flu and how it affects older adults. It also brings to attention the importance of finding new strategies for reducing flu-related complications in this older age group.

Eating carbs during or immediately after exercise may aid immune response