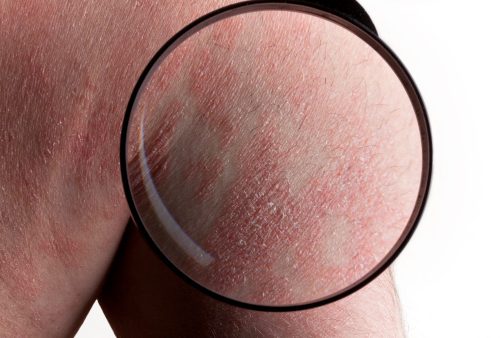 Psoriasis severity may be influenced by puberty, pregnancy, postpartum, and menopause. Female hormones have been found to play a particularly significant role in psoriasis. Psoriasis peaks take place during puberty, after pregnancy (although the condition improves during pregnancy), and during menopause.

One third of psoriasis patients present lesions by puberty. Other studies have noted that psoriasis peaks during puberty and again between the ages of 30 to 50. Higher levels of estrogen during the first menstruation may also play a role in inflammation. The researchers stressed that higher estrogen levels may influence certain immune responses that play a role in inflammatory processes in the body.

On the other hand, female patients experience improvement in their psoriasis when expecting. Pregnancy is associated with relief in psoriasis symptoms thanks to the rising levels of estrogen and the hormone’s anti-inflammatory effect. The researchers found that 55 percent of patients with psoriasis experienced improvement during pregnancy. (After pregnancy, however, the condition got worse in 65 percent.)

The researchers also mention significant or near-significant correlations between psoriatic body surface area and the concentrations of estradiol, estriol, and the estrogen-to-progesterone ratio. They concluded that “high levels of estrogen correlated with an improvement in psoriasis, whereas progesterone levels did not correlate with psoriatic change.

While pregnancy may offer relief of psoriasis symptoms, this once again changes during menopause. The researchers said, “A decrease in estrogen during menopause is believed to be a major factor in the occurrence or exacerbation of psoriasis flare-ups in patients already suffering from psoriasis and it is believed that reduced estrogen levels lead to insufficient Th1 cell-mediated response inhibition, playing a major role in the pathogenesis of psoriasis.”

David Bank, M.D., director of The Center for Dermatology, Cosmetic & Laser Surgery in Mt. Kisco, New York, concluded, “How to apply this to the clinical situation is potentially complicated, as the administration of estrogen hormones is not without potential side effects, such as a potential increased risk of breast cancer to increased risks of heart attacks and strokes. Furthermore, birth control pills, the most commonly prescribed form of estrogen, are mixtures of estrogen-like hormones and the progesterone can be pro-inflammatory.”


Role of hormones in psoriasis

In an alternative study of 1,633 menopausal women, half experienced worsened psoriasis symptoms at menopause. So far, there aren’t many findings supporting the use of oral contraceptives or hormonal replacement therapy during menopause for improving psoriasis outcomes.

Treatment for psoriasis should be tailored to each particular case. Predicting how the skin will react at different times and during different periods in life is hard. Sticking to the treatment that works is best strategy to follow.

If you have ever experienced itchy, irritated skin, then you know how frustrating and uncomfortable it can be, so understanding the differences between skin diseases like psoriasis and eczema, and knowing how to go about treating the skin, can bring both physical and emotional comfort. Continue reading…

Nail psoriasis and psoriatic arthritis symptoms have been found to be connected. Nail psoriasis is a condition in which the skin underneath the nails becomes affected by psoriasis, a skin disease. Continue reading…