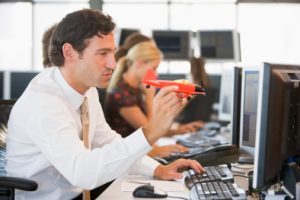 Negative health effects of prolonged sitting have come to light as of late, and now research has found that fidgeting movements can help combat such side effects. The research comes from the University of Leeds and UCL. They suggest prolonged sitting increases the risk of death in those who only noted they were occasional fidgeters.

Fidgeting is the act of making small movements. They can be repeated and are often done with the hands or feet. Fidgeting can result from nervousness or anxiety or even out of boredom.

In active women who reported moderate to very high fidgeting, there was no increased risk of mortality from prolonged sitting. Data was examined from the University of Leeds’ UK Women’s Cohort Study.

Co-author Professor Janet Cade said, “While further research is needed, the findings raise questions about whether the negative associations with fidgeting, such as rudeness or lack of concentration, should persist if such simple movements are beneficial for our health.”

Many of us can easily sit for up to eight hours a day; however, even if we are active, it is not necessarily enough to combat the effects of prolonged sitting.

Co-lead author Dr. Gareth Hagger-Johnson concluded, “Our results support the suggestion that it’s best to avoid sitting still for long periods of time, and even fidgeting may offer enough of a break to make a difference.”

The findings were published in the American Journal of Preventative Medicine.