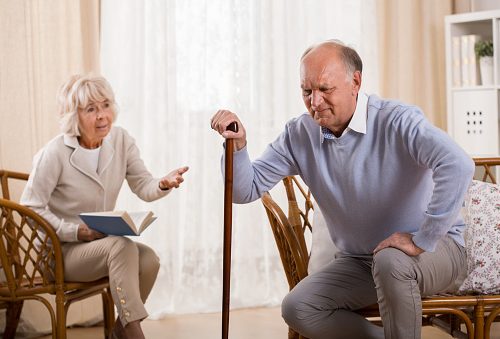 Watching TV has become a favorite past time of people young and old. Sometimes, the majority of our days are dedicated to watching our favorite shows. While being a couch potato is stigmatized, in the age of on demand television, sitting on the couch for extended hours has never been more popular.

Prolonged sitting has been documented to have a negative side effect on our health. When combined with lower levels of total physical activity, it could spell an increase in otherwise avoidable negative health consequences.

This overly sedentary behavior is also quite prevalent in our senior population. The results of a decade long study found that older people who watched more than five hours of TV per day and reported three or fewer hours per week of total physical activity were at a more than three-fold higher risk of being unable to walk or have difficulties walking.

“TV viewing is a very potent risk factor for disability in older age. Sitting and watching TV for long periods (especially in the evening) has got to be one of the most dangerous things that older people can do because they are much more susceptible to the damages of physical inactivity,” said lead author of the study Loretta DiPietro.

The study involved analyzing data that kept track of men and women age 50 to 71 from six states and two metropolitan areas. All participants were considered healthy at the beginning of the study. A record of how much TV was watched, exercise was done, and activities such as gardening, housework, or anything else that required a level of physical exertion was taken.

About 30 percent of participants reported having difficulty walking, had some kind of mobility disability, or were unable to walk altogether after the study had concluded.

Additionally, it was found that:

The young may be safe. For now.

The researchers say that younger people who follow similar trends may be able to get away with their sedentary lifestyle, as they are more physiologically robust than seniors. It is after the age of 50 that prolonged sitting can become particularly hazardous.

“We’ve engineered physical activity out of our modern life with commuting, elevators, the internet, mobile phones and a lifestyle (think Netflix streaming) that often includes 14 hours of sitting per day. Our findings suggest that older people who want to remain fit must ramp up their daily physical activity and reduce the amount of time they spend sitting,” says DiPietro.