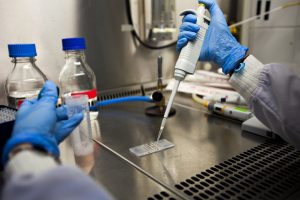 The 23 patients no longer required medication for multiple sclerosis and eight of them continued to show improvements over the course of eight years.

Lead researcher Dr. Harold Atkins said, “These patients had highly active MS with lots of relapses and lots of ongoing damage to their brain, but we’ve been able to stop that.”
“There are lots of drugs and treatments available that are able to slow the disease or temperately halt it, but this one seems to be significant in that it had a long-lasting effect,” Atkins explained.

Unfortunately, the new treatment isn’t for everyone as Atkins added, “Because of the side effects and the rigor of treatment, it is something that should be used with those with the most aggressive MS before they have real damage. This won’t work for patients who have advanced disabilities or are in a wheelchair.”

Due to the effected destruction of the patient’s immune system, they are left defenseless against the infection. Before the new treatment can be widely used, it must be tried on more patients.

The new treatment involves collecting bone marrow stem cells, purifying them, and freezing. The patient then undergoes high doses of chemotherapy, which crosses the blood-brain barrier and eliminates damaged immune cells. From this, the stem cells are then thawed and put back into the patient to start rebuilding the immune system.

Although improvements were dramatic, so were the side effects. One patient died of a toxic liver, and eight had moderate toxic effects. Fourteen of the participants experienced mild side effects.

Recovery time takes up to nine months for patients to resume their normal lives.

The findings were reported in The Lancet.