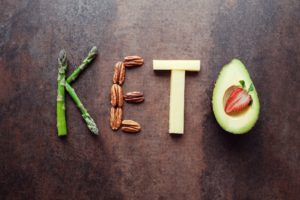 Popular high-fat diets like keto and paleo get a lot of love for their quick effects on weight loss, but are high-fat diets safe for the long-term? A new study is raising some serious questions.

When a high-fat diet is adhered to, users look for the bulk of their daily calories to come from fat, with the rest being made up of proteins. Other than a small selection of high-fiber vegetables, there is nary a carb to be had—it would defeat the purpose. But these diets may come along with an unexpected consequence: an unhealthy population of gut bacteria.

The healthy bacterial population in your gut, called the microbiome, thrives on plant foods. Particularly, it’s the fiber found in fruits, vegetables, whole grains, legumes, and nuts that spur the internal bacteria to live. A healthy microbiome is associated with lower inflammation, improved digestion, better mood, and other positive health benefits.

The western diet, which is high in processed and red meats, cheeses, and saturated fats has the opposite effect and may poison your population.

But a high-fat diet doesn’t mean that you’re eating necessarily unhealthy foods. Dairy, fish, meats, nuts, avocado, and olive oil are very healthy high-fat foods. So, what gives? Can you have too much of a good thing?

A research team looked at 200 non-obese young people. They were split into three groups for six months:

Each group had carbohydrates altered to allow for consistent calories, while protein and fiber intake was the same for all of the groups.

The high-fat group had an increased amount of a particular bacteria appear—one that is associated with high cholesterol and increased inflammation.

Most dietary guidelines suggest daily fat intake should be in the 20–30 percent range, and that the majority of them should come from “healthy” fats like olive oil, nuts, avocado, fish, and other unsaturated varieties. For the rest of your calories, look to some animal products and plenty of vegetables, fruits, and moderate amounts of nuts and whole grains for a complete and balanced diet.

When it comes to dietary fat, more may not mean better. If you’re on a keto-style diet, don’t stay on it for long—you want to keep your microbiome healthy!