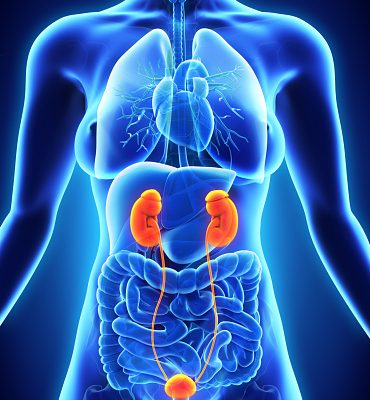 Kidney function (or renal function) naturally decreases with age, as is the course of life. Because of this, it is not abnormal for people in their elderly years to have some form of chronic kidney disease.

Though this generally only manifests in minor cases of the condition, moderate and severe cases have also been known to appear. In recent years, research has shown inconsistent results on the relationship between chronic kidney disease (CKD) and bone fracture risk. So far, the results have been controversial due to their unstable nature.

A new study was recently published, whose aim was to determine the relationship between decreased renal function and bone mineral density, fracture risk, and the role the thyroid hormone may play in the connection.

Bone mineral density was measured in the participants via dual-energy x-ray absorptiometry. They also measured for vertebral fractures through lateral spinal radiograph. Renal function was assessed in comparison to the five stages of kidney disease. The participants also had blood samples and urine samples taken to determine biochemistry. The researchers analyzed the data in relation to chronic kidney disease, bone mineral density, and the function of the thyroid gland.

The results showed that early kidney dysfunction was related to an increase of 38 percent in the risk of fracture in participants 65 and older. This result did not translate to vertebral fractures, however, to which there was no increased prevalence in the participants with renal dysfunction. These findings were true for both older men and women, with the only difference being that men showed a lower bone mineral density in the femoral neck in relation to decreased kidney function.

The researchers found that the increase in risk of fracture was correlated to the increased severity of kidney dysfunction in participants. In other words, the participants with the most advanced chronic kidney disease were also those most likely to experience a fracture out of the sample population. This result has also been shown in other research that claims that end-stage chronic kidney disease increases the risk of an osteoporotic fracture by four times, even in young adult populations.

This study is one of the first to confirm in a consistent way the relationship between a decrease in kidney function in older adults and the related increase in the risk of fracture.