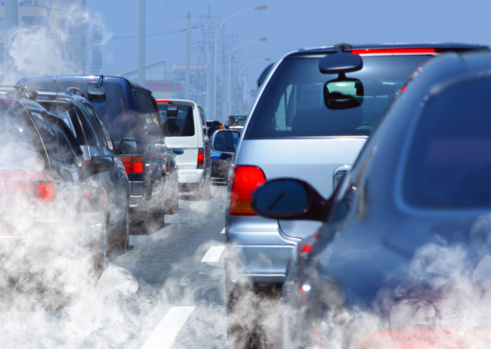 If you are experiencing difficulty in breathing and sometimes sharp pain in the chest, then it might be possible that the air in your environment may be of poor quality. Air pollution is generally described as air that is contaminated with various types of particles that come from factories and vehicle exhaust. Imagine the kind of air present in an area that is often plagued with heavy traffic. The stalled vehicles are often left idling for minutes in the same spot and thus a tremendous amount of exhaust is deposited in the air. It is possible that chronic inhalation of polluted air can ultimately result in sharp pain in the chest or massive pain during breathing.

Vehicular traffic and the accumulation of exhaust particles from burning gas have been strongly associated with various cardiovascular and respiratory diseases. These exhaust particles are so tiny that they have the ability to enter our bodies when we breathe in polluted air, causing inflammation of the respiratory cells, and possibly pain during breathing. In addition, these exhaust particles consist of small carbon cores that are coated with several organic molecules and heavy metals. The entry of these foreign particles into our respiratory system may therefore be harmful to the body. Aside from triggering our immune system to respond to the potential inflammation in cells of the respiratory system, it is possible that the sharp pain we sometimes feel when outdoors might be caused by air pollutants. Pain is usually a very uncomfortable feeling, often preventing us from performing our routine activities.

The Effect of Pollution on Your Respiratory System

According to a recent medical report published in the journal Environmental Health Perspectives, the entry of exhaust particles into cells of the respiratory system triggers a cascade of biochemical reactions that generate inflammation, and potentially, pain during respiration. These biochemical reactions in respiratory epithelial cells induce the production of calcium ions, which serve as messengers to other cells of the respiratory system. Unfortunately, the continuous production of calcium ions can also abnormally induce other chemical reactions, which in turn increases the chances of developing respiratory diseases. One of these end results is chronic obstructive pulmonary disease, which is characterized by the inflammation of pulmonary cells. The inflammation causes difficulty in breathing and is largely accompanied by a sharp pain in the chest area during inhalation.

It is common for us to think that a sharp pain in the chest is caused by a heart attack. It is important to seek immediate medical attention in order to determine the actual cause of the pain. In the case of respiratory diseases, echocardiography tests will often generate negative results because this diagnostic procedure is mainly based on detecting problems related to the heart. However, more extensive medical tests for the respiratory system, including a general physical examination done by a physician and chest x-ray, can help in determining if the pain is due to a respiratory disease.

This recent medical report addresses the mechanism that links respiratory diseases and air pollution. Although the association between these two entities has long been recognized, the details on the causes of inflammation of pulmonary cells and the sharp pain during breathing have remained elusive for decades. For years, all we knew was that air pollution causes respiratory problems, which are often described as pain and inflammation in the lungs.

The Effect of Pollution on Pain

The report thus provides information on how exactly small particles in polluted air can generate specific chemical reactions within respiratory cells that lead to sharp pain or massive pain in the chest. In addition, specific proteins have also been identified in the response to exhaust particles, possibly causing the sharp pain during breathing. The researchers speculated that the production of certain proteins during an inflammation is a response of the body to protect itself from foreign particles. It is also important to understand that the occurrence of pain in any part of our body is a sign that an inflammation may be present. Respiratory diseases have also been long considered as severe medical conditions that are often related to sharp pain during breathing, possibly caused by a dysfunction in either the expansion of the lungs during the intake of air, or the transmission of oxygen molecules to the rest of the body.

The medical report employed human airway epithelial cells that were cultured in the laboratory, a common method employed in research to represent the actual and specific part of the human body. It would thus be interesting to learn in the near future if the same results could be determined in actual patients suffering from severe respiratory diseases caused by air pollution. For now, the information on the link between inflammation of respiratory cells and air pollutants is clearer, thus allowing more opportunity for researchers to identify ways in preventing the development of sharp pain during breathing. Pain associated with breathing can also be alleviated through the prescription of drugs that could potentially target the specific cause of the respiratory disease.