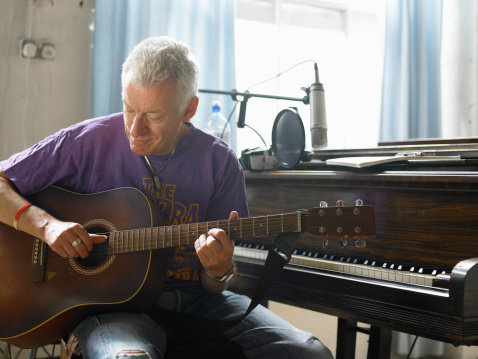 Listening to music has long been known to have an emotional effect on the listener. It can put us in a great mood, or it can make us feel depressed and isolated. Without a doubt, music holds a great power over us, and new research suggests that playing music can help older adults retain their listening skills and even ward off age-associated cognitive decline.

“Music has been known to have beneficial effects on the brain, but there has been limited understanding into what about music makes a difference. This is the first study demonstrating that learning the fine movement needed to reproduce a sound on an instrument changes the brain’s perception of sound in a way that is not seen when listening to music,” says Dr. Bernhard Ross, senior scientist at Baycrest’s Rotman Research Institute (RRI) and senior author on the study.

Learning to play a musical instrument was found to alter a person’s brain waves in a way that improves their listening and hearing skill over a short time frame.

This highlights the brain’s ability to overcome injuries or diseases that may affect a person’s mental capacity to perform tasks.

The study first recorded the brain waves of 32 healthy young adults who had normal hearing and no history of neurological or psychiatric disorders. Distinct bell sounds were played during the recording of these brain waves. The participants were then split into two groups, with one asked to recreate the same sounds and rhythms by striking a bell, and the other asked to do the same, but using a computer keypad.
“It has been hypothesized that the act of playing music requires many brain systems to work together, such as the hearing, motor and perception systems,” says Dr. Ross.

Direct changes in the brain were observed after just one session, according to the researchers. It demonstrated that creating music leads to a strong change in brain activity.

The next steps of the study involve using a similar type of musical training on stroke patients. Results will then be compared to traditional physiotherapy to see if any significant improvements are observed.

Based on their initial results, the researchers are confident that learning music as part of a rehabilitation program for traumatic brain injury can have a substantial impact on the treatment outcomes for this patient group.

Related: Your favorite music is shown to affect the brain