Home » Brain Function » The power of music may decrease the need for medication in dementia patients: Study 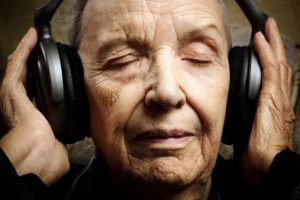 Suffering from Alzheimer’s or other kinds of dementia can be a disorienting and anxious experience. But according to a new study, personalized music made these symptoms easier to cope with.

Medications such as antipsychotic and antianxiety drugs were less relied on, leading to discontinuation, as these patients were significantly less likely to engage in disruptive behaviors compared to control subjects.

The study in question was conducted by Brown University, and it found that nursing home residents suffering from various forms of dementia whose faculty and family had personalized music playlists for them saw a marked improvement in anxiety symptoms and behaviors. This trend was seen after analyzing more than 25,000 nursing home residents from 196 different locations. The researchers note that they did not see a significant improvement in mood, however.

The researchers feel that this is a great new intervention for dementia patients with the added benefit of reducing the use of medication that can introduce all new side effects and problems. The families of these patients also feel that their dementia-affected loved ones appear more at ease when listening to their favorite music, helping them relax and breath easier.

To further expand on these positive results, new research was conducted in part with the Brown’s Center for Long-Term Care Quality and Innovation. The team identified 98 nursing homes that had implemented similar personalized music programs, documenting Medicare quality rating, geography, the age mix of residents, and other factors. Residents who had dementia and cognitive impairment but were not significantly impaired were included in the study which was comprised of 12,905 residents with personalized music programs and 12,811 residents without personalized music programs. Four metrics were followed: ending antipsychotic medication, ending antianxiety medication, reductions in disruptive behavior, and improvement in mood.
The researchers found that antipsychotics were 20.1 percent more likely to be discontinued in personalized music patients, while those without personalized music saw no. Antianxiety drug discontinuation rate rose to 24.4 percent compared to 23.5 percent before implementation of the music program, with non-music homes seeing a fall to 20 percent compared to 24.8 percent before.
Reduction of behavior problems saw an increase from 50.9 percent to 56.5 percent in music program homes. Non-music homes saw a flat rate, not seeing much change in a similar time period.

While positive results overall, the research team admits there are possible limitations to this study, as not all aspects of patient care could be tracked at every single nursing home. They can’t be completely sure that the results seen were entirely the result of personalizing music therapy, but are confident that their data adjustment for random variables may mean that the program had a greater impact than reported.

Your favorite music is shown to affect the brain