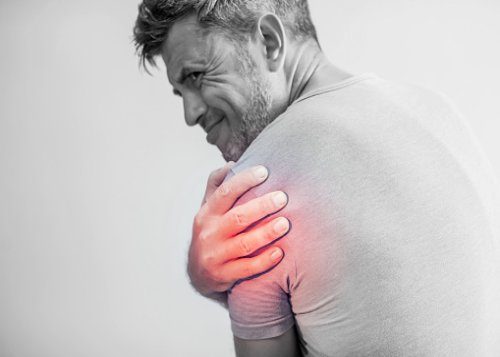 Periarthritis (frozen shoulder) is a condition that leads to pain and stiffness in and around the shoulder joint. With a frozen shoulder, the capsule of the humerus – which is a loose joint capsule over the shoulder – becomes thick, tight, and very difficult to move. Some doctors will refer to this as adhesive capsulitis since there could be adhesions in the joint and inflammation in the capsule.

If untreated, periarthritis or frozen shoulder can take as long as two or three years to go away, but with proper diagnosis and care, sufferers can ease the pain that comes with this condition.

Frozen shoulder was first talked about back in the 1930s when surgeon Ernest Codman described a painful shoulder condition that was characterized by stiffness and difficulty sleeping on the affected side. The doctor also noticed a reduction in external rotation in individuals with this stiffness. Back in 1872, similar symptoms were labeled as periarthritis.

Periarthritis happens to about two out of five people at some point in their lives. For the most part, it happens to those who are between the ages of 40 and 65. For some reason, women are more prone to it. Those who have diabetes or other health conditions, such as overactive thyroid disease, seem to be at higher risk.

While either shoulder can be affected by periarthritis, in most cases, it’s the non-dominant shoulder. So, if you were left-handed, the right would have more of a chance at being impacted. There are situations – about one in five – where the condition occurs in one shoulder and then develops in the other shoulder within about five years.

What Are the Causes of Periarthritis or Frozen Shoulder?

Periarthritis can be disruptive, especially if you’re an active person. The pain and limited mobility in the shoulder makes it hard to carry out physical tasks.

There are several potential frozen shoulder causes including being sedentary, having post-surgery scarring, or suffering from conditions that require certain medications.

Experts suspect that periarthritis causes are linked to the development of joint inflammation and scar tissue formation. The theory is that as this happens, tissues inside the joint shrink and harden, which make it difficult for the shoulder to move. What we don’t know for certain is why the scar tissue forms.

Some potential periarthritis causes include being immobile for long periods of time, having shoulder surgery of some kind, and taking certain medications, such as antiretroviral drugs.

The primary periarthritis symptoms are pain and stiffness that make it hard to move the shoulder. Some people report that they feel pain in the shoulder that wraps around the top of their arm. Often, this pain gets worse at night, making it difficult to get a good night’s sleep.

How to Diagnose Periarthritis

When someone has a frozen shoulder, they usually have both active and passive range of motion limitations. When they reach the range limit, they don’t just have difficulty moving beyond a certain point due to pain; it feels like the arm is stuck. People who suffer from periarthritis will have a hard time putting their arm behind their back and rotating their shoulder outward and away from their body.

There are situations where a physical evaluation isn’t enough. Frozen shoulder diagnosis can also involve imaging or other tests. Imaging such as X-rays, magnetic resonance (MRIs), or ultrasound can be used to rule out other problems that cause similar symptoms. These problems include torn rotator cuffs and arthritis.

Periarthritis treatment ranges from physical therapy and over-the-counter medications to special injections and shoulder manipulation. Below is an explanation of the different frozen shoulder treatment options.

Prescription medications: There are situations where stronger medications prescribed by a doctor are needed to get the pain and inflammation associated with frozen shoulder under control.

Corticosteroid injections: These are injections that go into the shoulder joint to reduce pain and help improve range of motion.

Joint distension: This is when a doctor injects sterile water into the shoulder capsule to stretch it. Joint distension can help some frozen shoulder sufferers move their shoulder more easily.

Physical therapy: Although results are mixed on the effectiveness of physical therapy, many experts suggest that it can be helpful during certain stages of frozen shoulder.

Surgery: While it’s rare for people with a frozen shoulder to require surgery, it is possible in some cases to gain relief with an arthroscopic procedure. This is a non-invasive approach to surgery that involves tiny tools that are inserted through small cuts in the shoulder.

Frozen shoulder prognosis is generally good. Most people recover within a couple of years without treatment. Treatments such as anti-inflammatories and physical therapy are known to speed up the recovery process.

It is important to note that in severe cases where treatment is not as effective or administered late, it can take as long as five years to recover.

While most people don’t get frozen shoulder twice in the same shoulder, they can get it in the opposite shoulder.

When people suffer from frozen shoulder, they tend to not want to move the affected arm. This can be a mistake since not moving can make the pain worse in the long run. Some people who feel like their shoulder is stuck find that they benefit from using a heat or cold pack on their shoulder.

If you suspect that you might have frozen shoulder, don’t make up your own exercises or use strenuous equipment at the gym, try not to slouch when sitting, and seek medical attention if you are in a lot of pain.