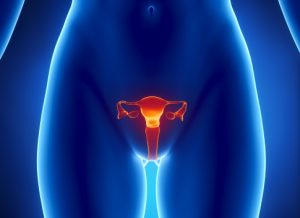 Polycystic ovarian syndrome (PCOS) is a set of symptoms that are caused by elevations of androgen (male hormones) in the female body. It includes symptoms like a lack of menstruation or heavy periods, excess body or facial hair, acne, pelvic pain, and a patch of thick, dark, velvety skin. The reasons for its occurrence stem from a combination of environmental and genetic factors, though the exact reason for its cause is not understood. The following are likely factors contributing to the development of PCOS:

Excess insulin: The primary hormone involved in glucose metabolism and secreted by the pancreas. Excessive amounts of this hormone occur in states where bodily tissue becomes resistant to its effect, leading the pancreas to produce more to compensate. Increased amounts of insulin in the body may affect the ovaries by increasing androgen production, interfering with the process of ovulation.

Heredity: Having a family history of PCOS increases the chances of it occurring. Particular genes may play a role, according to researchers.

As it stands, there is no definitive cure for polycystic ovarian syndrome, with treatment aimed at regulating the menstrual cycle, increasing ovulation, and decreasing excessive hair growth. This may come in the form of a lifestyle change and prescription drugs. However, some simple home remedies may be effective for certain individuals, but they are not a replacement—you need to speak to a doctor if you have PCOS.

Cinnamon: A study from Columbia University found that cinnamon supplementation can help improve menstrual cycles in women with PCOS. The researchers attributed this finding to cinnamon’s ability to reduce insulin resistance. Consuming approximately two tablespoons of cinnamon powder daily in the form of tea or capsule (100mg three times a day) for a few months can be beneficial for PCOS individuals.

Flaxseed: Contain lignans (a chemical compound found in plants) that increase the production of sex-hormone binding globulin (SHBG), binding to testosterone in the blood and decreasing overall androgen levels. To get these beneficial effects, it is required to grind the seed first and consume them daily for a few months. Adding them to water, smoothies, soup, and salads are great ways to eat flaxseeds.

Apple cider vinegar: Can help control blood sugar levels, curbing the release of insulin. This, in effect, will help decrease testosterone levels seen in PCOS patients. It can be taken daily with two tablespoons mixed with water and should be done for a couple of weeks.
Fenugreek: Promotes glucose metabolism and improves insulin resistance. They can be consumed by soaking the seeds in water along with some honey, then eating them by the spoonful for a couple of weeks.

Saw palmetto: Known to block 5-alpha reductase activity, an important biochemical process in the production of male sex hormone. It may help prevent excessive hair grown in women with PCOS and may also help scalp hair to grow back.

Chasteberry: Also called vitex, chasteberry may be helpful for hormone balancing and is also used as a remedy for menstrual problems. Can be consumed by boiling it in water, straining, and drinking the tea.

Fish oil: Known for its abundant omega-3 content, fish oil also helps reduce androgen levels and improve insulin sensitivity. A study published in the American Journal of Clinical Nutrition states that this oil can improve the symptoms of PCOS by balancing androgen levels.

Licorice: Found to reduce serum testosterone levels in women with PCOS, according to research. They believe that the glycyrrhizin in the herb inhibits an enzyme required for testosterone production. Licorice is a dry root that can be made into a tea or taken as a supplement.

Holy basil: Also known as tulsi, this herb can help reduce the symptoms of PCOS due to its anti-androgenic properties. It can also manage insulin levels and aid in weight loss. It is safe to consume eight to twelve leaves daily or make tea a few times a day.

Water: Vital to the body, water also serves to flush out toxins and free radicals. Drinking about 10 glasses a day may help ease the symptoms of PCOS.

Controlling weight: Being overweight or obese increases the risk of developing high blood pressure, diabetes, and high cholesterol, all of which can aggravate PCOS symptoms.

Exercising regularly: Not only does regular exercise help maintain your weight, but it also helps improve insulin sensitivity and regulate menstrual cycles. Moderate amounts of exercise are recommended for PCOS patients. These may include jogging, running, skipping, and swimming.

Avoiding negative lifestyle habits: Smoking cigarettes can already have a negative impact on your health, but it may also increase androgen levels and restrict ovulation in PCOS patients as well. Excessive alcohol consumption may also cause dehydration and sudden hunger pangs possible resulting in excess calorie intake.

Related: Hypothyroidism vs. PCOS, differences in symptoms, causes, and treatment