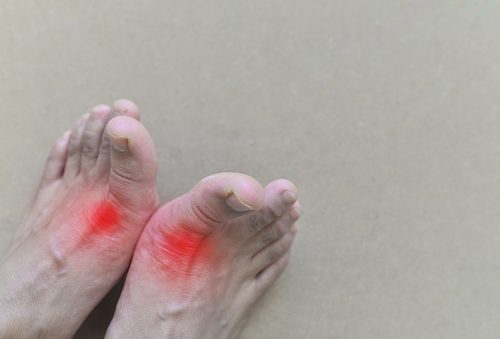 Dr. Bharathi Av, the founder of the Just Right Obesity Clinic, explained, “The incidence of gout and high uric acid-related ailments has been on the rise globally, potentially attributable to recent shifts in diet and lifestyle, and increased longevity.”

What is uric acid and gout?

Foods that are high in protein release what are known as purines when they are broken down through the digestion process. Purines are responsible for the increase in uric acid. Most uric acid dissolves in the blood and is expelled from the body through urine. But when the body produces too much uric acid, it lingers in the body.

As uric acid travels through the bloodstream, it can pool and crystalize in smaller joints—most commonly the big toe—which can result in pain.

Joint surgeon and orthopedist Dr. Ajith Prabhu explained, “Recurrent gout attacks lead to chronic gout. It can lead to erosion of cartilage and bones and severe joint deformities such as deformities of the toe, inward turning of the toe, etc.”

Nephrologist Dr. Sudarshan Ballal added, “Advancing age, being of male gender, obesity, use of certain drugs like aspirin, cyclosporine or levodopa, eating a lot of purine-rich foods (organ meat and fish), drinking a large amount of alcohol, particularly beer, and thyroid problems are some of the factors that increase the risk for gout.”
Men are more likely to develop gout than women because women are protected by estrogen, which helps expel higher levels of uric acid.

Gout attacks can also be aggravated among individuals who take in small amounts of fluid. It’s important that a person with gout does what they can to prevent attacks from occurring, as they are highly painful and debilitating.
Not all people with high uric acid levels will go on to develop gout. It is more commonly seen in those who have a family history of gout.


Symptoms and treatment of gout

Some symptoms may not be noticeable until gout has become quite severe. Common symptoms include pain, swelling, redness, heat, and stiffness of joints. As mentioned, the first common area that gout affects is the big toe, but it can eventually spread to other joints in the ankles and wrists.

Diet plays a large role in the prevention and treatment of gout. This includes reducing your intake of high protein foods, as they will produce purines, which can be converted into uric acid.

Along with diet changes, medications are necessary to reduce the production of uric acid or aid in the release of uric acid from the body.

When a gout attack occurs, damage occurs to the joint, so preventing them is necessary in order to protect joint health.

Related: Purine-rich foods: Foods to avoid to reduce the risk of gout

Is gout in elbow common? Causes, symptoms, and treatment of elbow gout