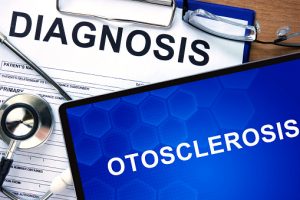 Otosclerosis—also known as otospongiosis—is a condition that affects the ears where an abnormal growth of bone forms around the stapes bone, a tiny bone in the middle of the ear. This bone is then stuck in place, and for the ear to work properly, it needs to be able to move freely. The growth also impedes on the function of the other parts of the ear, sometimes resulting in severe hearing loss.

Ears have three parts: the outer ear, the middle ear, and the inner ear. Sounds enter the outer year, where they pass through into the middle ear, causing the eardrum to vibrate. The vibrations are transmitted through ossicles—tiny bones in the ear—to the inner ear, where they move through tiny hair cells in the cochlea. The hair cells convert the sound waves into nerve impulses which then travel to the brain.

As you can see, hearing is quite a complex function. If any one step in the process is impeded, the entire process goes wrong, manifesting as partial or complete hearing loss.

Otosclerosis or otospongiosis: Who’s at risk?

Otosclerosis typically presents itself in Caucasians, and 10 percent of the adult Caucasian population have the condition. It is rare in African Americans and less common in Japanese and South Americans. Regarding sex, middle-aged women are the most at risk. The disease is also more prevalent in pregnant women, as they may experience rapid hearing loss for unknown reasons.

Gradual hearing loss can start between the ages 15 and 45, although it usually begins in the 20s. Most people who experience otosclerosis have a genetic predisposition—in fact, about 60 percent of patients are genetically predisposed. If one of the parents has otosclerosis, there is a 25 percent chance of passing it on to the child, and if both parents have it, the risk is as high as 50 percent.

Can otosclerosis cause deafness?

The condition usually begins as gradual hearing loss. The degree of hearing loss may increase over time, but it doesn’t usually progress to deafness. However, in rare cases, it can spread to the inner ear and cause more severe hearing loss that cannot be treated.

The average case of otosclerosis can be treated, but if you let it go on, you could experience possible complications like complete deafness, nerve damage, infection or blood clot, or a weird taste in the mouth.

Hearing loss is the most common symptom of otosclerosis, but other symptoms include dizziness, tinnitus, or balance problems. Tinnitus is a condition that manifests as ringing in the ears and it often accompanies hearing loss.

Otosclerosis is mainly inherited. As previously mentioned, it typically occurs when the stapes bone in the ear gets stuck in place. It’s supposed to be able to move freely, so when it cannot, you experience hearing loss.

Researchers believe it is related to stress fractures to the bony tissue in the ear, prior measles infections, and immune disorders. It may have to do an imbalance of cytokines which could cause abnormal bone formation in the ears.

When you begin to experience hearing loss, you should do and see an ENT (ear, nose, and throat specialist) to ensure that your ears are actually the problem. You may have to do a hearing test, and depending on the results, your ENT may diagnose you with otosclerosis and suggest possible treatments.

The severity of your hearing loss will dictate what treatment option you are recommended. If your hearing loss is severe, your ENT will recommend a hearing aid as well as continued observation. They oftentimes prescribe sodium fluoride, which can slow down the disease. In more severe cases, they may recommend you to get surgery called a stapedectomy.

A stapedectomy is a procedure done in the ear canal with a microscope. Either the entire stapes bone or just a part of it is removed and replaced with a prosthetic. It’s been performed since 1956 and has a 90 percent success rate. One percent of surgeries result in more severe hearing loss.

So, if you’re suffering from hearing loss and don’t know what is causing it, make sure you see an ENT. If you are diagnosed with otosclerosis, don’t fret—as long as it’s caught early, the symptoms can be halted and it won’t be too severe.