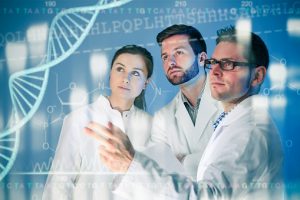 Some of the most life-affecting disorders appear at birth and stick around for life. New research claims to have found the genetic cause of a rare disorder responsible for some of the most quality of life reducing abnormalities that cause children to be born with deafness, blindness, albinism, and fragile bones.

This syndrome in question is called COMMAD, getting its name from a number conditions that affect people with this disorder.

This syndrome occurs in children who inherit two mutations, one from each parent. The gene is named MITF and it results in the parents experiencing deafness due to another rare genetic disorder called Waardenburg syndrome A2. While more research is needed to learn about the role MITF has during early development and how mutations result in both COMMAD and Waardenburg syndrome A2, this is definitely a step in the right direction, according to researchers from the U.S. National Eye institute.
The identification of the gene involved is not only a key step in research development but is also practical knowledge for the one currently affected by lifelong deafness, especially when choosing a husband or wife. It is generally considered commonplace for a deaf man or woman to seek out a similarly deaf individual as a partner. The problem arises if both individuals are unknowingly the carriers of the MITF gene, which may be the cause of their life-long deafness. Ignoring this fact puts a couple’s potential offspring at risk for developing COMMAD syndrome, but now with the discovery of the MITF genes, couples with these genes will be able to get genetic counseling before conceiving a child.

The study in question was published in the American Journal of Human Genetics and describes two unrelated cases of children born with COMMAD syndrome who inherited the two mutations of MITF from their parents.