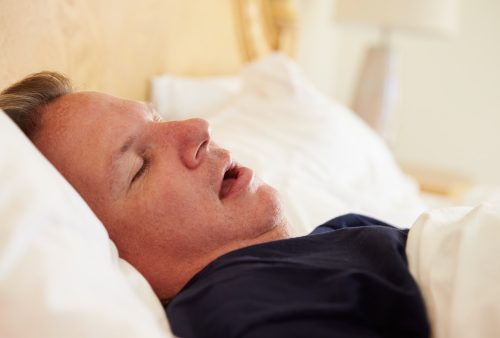 Lead researcher Dr. Katherine M. Sharkey said, “Patients with obstructive sleep apnea frequently complain of sleepiness during the daytime, loss of motivation and interest in activities, as well as poor concentration and memory recall. However, we found that while the vast majority of patients considering bariatric surgery for treatment of obesity have clinically significant OSA, they report fewer symptoms, and may be attributing daytime napping and decreased functioning to something other than a sleep disorder.”

There is a high prevalence of sleep apnea among obese individuals which increases the risk of negative health outcomes, like high blood pressure and heart-related problems.

The study looked at 269 patients who had sleep evaluations prior to bariatric surgery. Of the group, nearly 60 percent had moderate to severe obstructive sleep apnea that was not previously diagnosed. Even with the high prevalence, these patients reported fewer symptoms.

Dr. Sharkey concluded “The lack of symptoms of sleep apnea in this population means that we must be even more vigilant in identifying sleep apnea prior to bariatric surgery in order to reduce the risk of complications.”


How does obstructive sleep apnea get affected by bariatric surgery?

Bariatric surgery is used for obese individuals as a means to lose weight. Being overweight or obese is a risk factor for sleep apnea, so it would make sense that if a person loses weight they can reduce their risk of sleep apnea or improve their condition.

If you have sleep apnea and are overweight, it should be your goal to lose weight as a means of treating your sleep condition and reducing the associated health risks. This can be done through healthy eating habits, regular exercise, smoking cessation, and alcohol intake reduction.