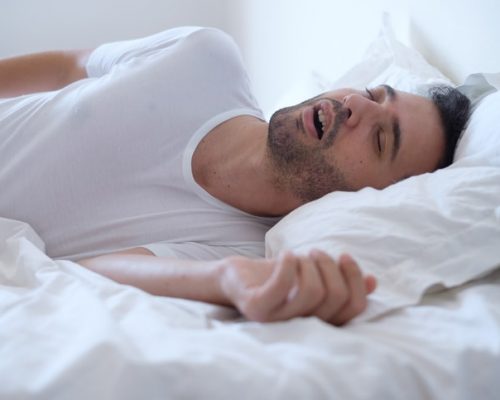 Obstructive sleep apnea is the periodic cessation of breathing during sleep, cutting off oxygen to the brain and lungs. It’s a relatively common chronic condition that is believed to affect 10 percent of middle-aged men. The condition can be asymptomatic but often results in poorer sleep quality, sleepiness during the daytime, and lowered quality of life. Past research has connected sleep apnea with cardiovascular disease, stroke, and hypertension, but new research has found that there may also be a connection between sleep apnea and erectile dysfunction in men.

Erectile dysfunction is the inability to achieve and maintain an erection to sexual satisfaction. It is not uncommon, affecting around 20 percent of men between the ages of 30 and 70, with prevalence rising with age. There has also been a connection shown between the prevalence of erectile dysfunction and sleep apnea, with 69 percent of male sleep apnea patients complaining of erectile problems as well. These patients are also considered to be at an increased risk for cardiovascular disease.

Only changes in the sexual satisfaction of those in the experimental group were statistically significant over those in the control group, however. The treatment did not show any changes to the psychological, hormonal, or biochemical profiles of the patients with erectile dysfunction.

The results of this study are concurrent with the canon of literature on erectile dysfunction in patients with obstructive sleep apnea. The prevalence of erectile dysfunction found here was slightly lower than normal (51 percent versus 69 percent), but the researchers feel this is due to their use of harsher exclusion criteria, having omitted from the study any participants who had significant risk factors for erectile dysfunction.

These results are statistically significant and suggest that male patients who are diagnosed with erectile dysfunction should also be tested for sleep apnea, as there is a proven link between them. CPAP treatment may then also help to increase their sexual satisfaction if that is the case.