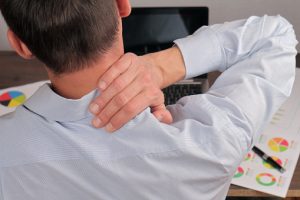 The researchers looked at over 1,200 sleep clinic patients and found that individuals with sleep apnea had double the risk of experiencing a workplace injury and were three times more likely to have an injury related to failed vigilance, such as tripping or falling.

Study author Najib Ayas said, “A lot of times, people may not remember being woken up, it’s like someone going in there and shaking them awake many times per hour. They wake up and they feel quite tired during the daytime, and we think that that’s probably what accounts for the increased risk.”

Obstructive sleep apnea is a condition in which a person temporarily stops breathing throughout the night. It affects about 22 million Americans.

Sleep apnea patients had double the risk of experiencing a workplace injury and tripled the risk of a failed vigilance-induced accident, like tripping, burn, car crash, or fall.

Even after adjusting for other factors, sleep apnea patients were still 76 percent more likely to experience workplace injury, compared to individuals without the sleep disorder.

For the study, sleep apnea patients were compared to patients with alternative sleep disorders, but Eva Lindberg, a professor at Uppsala University in Sweden, noted the risk could be higher in comparison to individuals who do not suffer from any sleep disorder at all.

Lindberg said, “It is, of course, important for all workers to be safe at work and avoid occupational injuries. The risk is highest at workplaces where a high vigilance is needed.” She added that workplaces should screen their employees for sleep apnea to determine injury risk.

Ayas concluded, “If you have characteristic symptoms of sleep apnea, you should probably talk to your doctor.” Sleep apnea treatment is quite successful and can help lower the risk of workplace injuries.

A previous study examined insomnia and lack of sleep with regards to workplace injury, and found that individuals experiencing poor sleep are also at an increased risk of workplace injuries. Furthermore, these injuries cost the U.S. healthcare system nearly $31 billion and account for 274,000 workplace injuries annually.

The findings could encourage workplaces to screen for sleep disorders and insomnia.

Sleepiness is a large contributing factor to workplace injuries as it can negatively impact memory, focus, and alertness.

The study surveyed over 10,000 people who answered questions over the phone. The researchers focused on 5,000 employed individuals.

The researchers estimated that nearly 20 percent of the participants suffered from insomnia within the last year. Furthermore, 5.5 percent of those who appeared to have suffered from insomnia caused accidents or made errors costing at least $500 – compared to the four percent who did not have insomnia. Examples of occupational accidents and errors include making mistakes on an assembly line or experiencing a car accident.

Kevin Morgan, director of Loughborough University’s Clinical Sleep Research Unit, praised the research as it brings up the harmful effects of sleepiness and sleep disorders in the workplace, but added that “this research is directed at people screwing up at work.”

“You can feed them sleeping tablets — this works in the short term — but then it goes bad, creating drug-dependent patients who get little benefit from their drugs. Ironically, you then have to invest in withdrawal programs to get them off drugs, only to find that the insomnia — which was there all the time – returns,” he continued.

Insomnia is a condition that is inexpensive to treat. Nearly 60 to 70 percent of insomniacs can benefit from four to five hours of cognitive behavioral therapy.