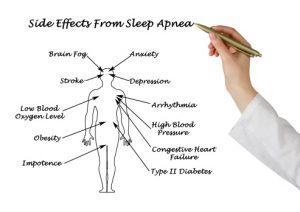 When the blood-brain barrier is broken or compromised, it is not able to function properly in its protective role. When it is functioning, it is able to limit dangers to the brain such as infections, chemicals and harmful bacteria by successfully protecting the brain tissue. However, a compromised blood-brain barrier is linked to substantial damage in the brain, leading to epilepsy, multiple sclerosis, stroke, meningitis, Alzheimer’s disease and other serious conditions.

Obstructive sleep apnea is a fairly common, and often serious sleep disorder, affecting around 22 million adults in the U.S. During sleep, it causes repeated disruptions in breathing by narrowing or blocking the airways. It most commonly affects those who are overweight, middle aged or older adults. Disrupted breathing is caused when the throat relaxes and is often noticeable due to its most common symptom: snoring.

The new research could initiate innovative methods for treating obstructive sleep apnea and aiding in the prevention of potential brain damage. Obstructive sleep apnea can also cause depression, memory loss, anxiety and high blood pressure. Over an extended period of time, aside from causing consistent sleepiness through the day, the effects of the disorder can cause stroke, diabetes, endocrine-related problems and a decrease in testosterone levels.

The damage to brain health is caused by a reduced intake of oxygen to the brain. The researchers discovered that this occurs during obstructive sleep apnea. The study’s principal investigator, Rajesh Kumar (an associate professor in the departments of anesthesiology and radiological sciences at the UCLA Geffen School of Medicine) says, “We found that the blood–brain barrier becomes more permeable in obstructive sleep apnea, a breakdown that could contribute to brain injury, as well as potentially enhancing or accelerating the damage.”

Using a non-invasive procedure called magnetic resonance, the team of researchers were able to determine the breakdown of the blood-brain barrier. They found that individuals who were recently diagnosed with the disorder, but had not yet been treated, had a considerably greater chance of penetrability in the blood-brain barrier when compared with healthy individuals.

“This suggests that besides improving breathing in obstructive sleep apnea patients, we need to repair or improve blood–brain barrier function, perhaps by using treatments already available for other conditions”, says Kumar. Due to the small size of the original study (18 participants, half of whom had obstructive sleep apnea), the researchers are moving forward to confirm their findings in the greater public. They also plan to learn more about the relation between blood-brain barrier obstructions caused by sleep apnea (and other long-lasting respiratory issues) and other neurological conditions.