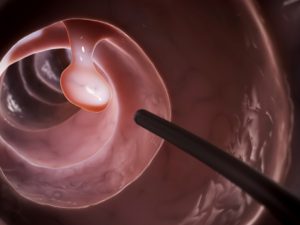 Although it is well-known that obesity increases the risk of colon cancer the exact link has never been quite fully understood. New research has now looked further into the link between obesity and colon cancer and has uncovered the biological connection which could lead to better treatment and preventative options in the future.

The study was conducted on mice where researchers found that a high caloric diet turned off a key hormone in the intestine which deactivates a tumor suppressor pathway. Researchers noted that genetically replacing the hormone turned it back on which prevent cancer development.

The findings of the study reveal the benefits of a pill known as linaclotide (Linzess) which is structurally related to the lost hormone as a means of preventing colon cancer in obese patients.

Study’s senior author, Scott Waldman, said, “Our study suggests that colorectal cancer can be prevented in obese individuals with use of hormone replacement therapy — much as other diseases associated with hormone deficiency, such as loss of insulin in diabetes, can be treated.”
“These findings came as a surprise — we and many other researchers worldwide have been trying to disentangle obesity from development of colorectal cancer. Calories sit in the middle of these two conditions, but the question of what they were doing has been one of the most perplexing and provocative questions in cancer research. Now we finally have a big clue as to the origin of colorectal cancer in obese individuals and perhaps in other people as well,” Dr. Waldman added.

Obese patients are at a 50 percent greater risk of colon cancer than people who are not obese. Dr. Waldman is already part of clinical trials of the medication and testing dosages and side effects in healthy individuals.

Dr. Waldman explained, “The beauty of our findings is that while we know the hormone is lost in the obese mice, its receptors are just sitting there waiting to be switched on. And this study demonstrates that if you can prevent hormone loss, you can also prevent tumor development. These findings suggest that a drug like linaclotide, which acts like guanylin, can activate GUCY2C tumor-suppressing receptors to prevent cancer in obese patients.”

“The challenges of lifestyle modification notwithstanding, our observations suggest that calorie restriction can reconstitute guanylin expression. This may be an effective strategy to prevent colon cancer in the obese,” Dr. Waldman concluded.