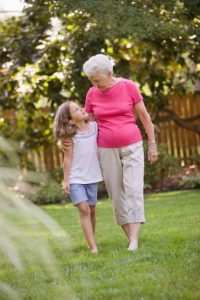 Well, the United States obesity rates may be down in preschoolers, but they’re up for older women, according to new statistics.

A recent survey, conducted by the U.S. Centers for Disease Control and Prevention (CDC) and published in the Journal of the American Medical Association (JAMA), revealed that obesity rates among children – aged 2 to 5 years – decreased by 43 percent over the last 10 years.

Meanwhile, the rate of obesity increased dramatically among women aged 60 and over. Which still spells trouble for our aging population and the oppressive and rising costs of obesity-related illness to the healthcare system.

Researchers made the discovery by looking at data from the CDC’s own National Health and Nutrition Examination Survey, which took samples from 9,000 Americans of all ages.

The survey followed another announcement by the CDC that revealed a dramatic fall in obesity rates among two to four year olds from low-income families – those who took part in federally-funded nutrition programs.

“We continue to see signs that, for some children in this country, the scales are tipping,” CDC Director Dr. Tom Frieden told Medical News Today.

“We’ve also seen signs from communities around the country with obesity prevention programs, including Anchorage, Alaska, Philadelphia, New York City and King County, Washington. This confirms that at least for kids, we can turn the tide and begin to reverse the obesity epidemic.”

Why there was a drop in preschooler obesity rates remains unclear, the CDC said, but improved standards for nutrition and physical activity within the U.S.’s child care centers likely have something to do with it. The consumption of sugary drinks has been reduced. And there have been improvements in breastfeeding, which can help prevent obesity in breastfed children.

Still, the obesity rate for adults – particularly older women –warrants a watchful eye. Putting on weight appears to be an inevitable part of the aging process. As early as your mid-20s, body fat starts to increase while muscle mass decreases. And generally speaking, less muscle mass means a much slower metabolic rate. While the odds are against you, fighting fat gain comes down to healthy eating and eagle-eyeing portion control, as well as making regular exercise a priority to boost metabolism and keep your body functioning at its best.

Also, in 2013, the CDC reported that only one in five American adults exercises enough. In fact, only 20 percent met the federal government’s physical activity guidelines, especially those having to do with aerobic and muscle-strengthening.

According to these same guidelines, adults should participate in at least two and a half hours of moderate physical activity – like walking – every week, or just one hour and 15 minutes of vigorous aerobic activity – like jogging – during the same period. Additionally, adults should get involved in muscle-strengthening activities, including sit-ups, push-ups or exercise involving resistance bands or weights.

But the benefits of exercising regularly not only lower the risk of obesity, it can decrease chances of developing stroke, high blood pressure, coronary heart disease, type 2 diabetes, colon and breast cancer, as well as depression. What’s not to love about that? Moving more is worth the effort.

So now you understand why you tend to put on the pounds with age – and more importantly, what you can do about it!