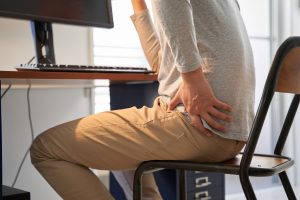 Chronic back pain affects millions of Americans. Most, however, cannot identify the source. Neither can all the x-rays, tests, or other tools that doctors have to diagnose problems.

About 85 percent of people who report chronic back pain don’t have a test to highlight a cause. They go through physical therapy and medication to no avail. But a new study suggests that a few weeks may be all that is needed to unlearn pain.

Most treatments for chronic pain operate under the assumption that it’s caused by the body. This new work was done under the premise that the brain can generate pain in the absence of an injury or after an injury has healed. By unlearning that pain, sufferers may be able to relieve themselves.

The study had very strong results. It involved 151 men and women who experienced back pain for at least six months. They took part in a four-week psychological treatment called Pain Reprocessing Therapy, attending eight one-hour sessions.

The findings were published in JAMA Psychology.

Therefore, by thinking about pain as something safe instead of threatening, patients may be able to neutralize it.

This seems to be what happened during the study. Brain scans revealed that brain regions associated with pain processing had quieted significantly after treatment.

If you’ve been experiencing untreatable chronic pain, this is an avenue worth exploring. It may have lasting effects to help you restore a pain-free life.