Home » Anti-Aging » Do Mushrooms Hold the Key to Anti-Aging? 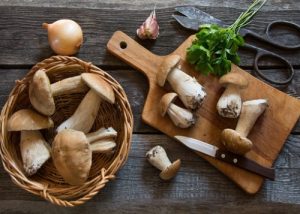 Whether you love mushrooms are not, here’s a great reason to eat them: They counter the effects of aging.

Researchers at Penn State University found that mushrooms were rich in two very powerful antioxidants which can reduce oxidative stress in the body. Some mushrooms, like porcini, were found to have higher levels of these antioxidants than others.

Professor Robert Beelman of Penn State explained, “What we found is that, without a doubt, mushrooms are the highest dietary source of these two antioxidants taken together, and that some types are really packed with both of them. We found that the porcini has the highest, by far, of any we tested. This species is really popular in Italy where searching for it has become a national pastime.”

Here’s a recipe to get you started.

Arrange the mushrooms, hollow side up, on a rimmed broiler pan. In a large sautée pan, heat the olive oil over medium heat. Add the garlic, onion and green bell pepper, cook until soft and place in a large bowl. Stir in the shredded spinach, white wine, egg and feta cheese.

Mound 1 to 2 tablespoons of the mixture into each mushroom cap, using more or less depending on the size of the mushroom. Bake in the oven at 350 degrees Fahrenheit for 20 to 25 minutes or until stuffing is browned and mushrooms are soft.