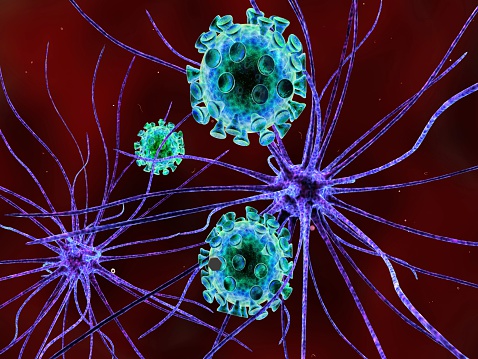 Multiple sclerosis (MS) may be triggered by the death of myelin-producing brain cells (oligodendrocytes), which causes an autoimmune response against myelin. The findings come from researchers at the University of Chicago and Northwestern Medicine who developed novel mouse models to conduct their study. The researchers found that the death of oligodendrocytes initiates an autoimmune response against myelin, triggering multiple sclerosis-like symptoms in mice.

On the other hand, the researchers found that the reaction can be prevented using the specially developed nanoparticles even after the loss of brain cells. These nanoparticles are now being developed in clinical trials with prospects for future treatments in humans

Co-senior author Brian Popko said, “Although this was a study in mice, we’ve shown for the first time one possible mechanism that can trigger MS — the death of the cells responsible for generating myelin can lead to the activation of an autoimmune response against. Protecting these cells in susceptible individuals might help delay or prevent MS.”

In their genetically engineered mouse model, the researchers targeted the myelin-producing cells. After oligodendrocytes were killed, the mice experienced multiple sclerosis-like symptoms that impaired their walking ability. But after this event, the nervous system started regenerating the oligodendrocytes once again, which allowed the mice to resume walking. After six months, however, the mice experienced difficulty walking again, the researchers noted.

Coauthor Maria Traka added, “To our knowledge, this is the first evidence that oligodendrocyte death can trigger myelin autoimmunity, initiating inflammation and tissue damage in the central nervous system during MS.”

The researchers are now working on the nanoparticle technology as a possible multiple sclerosis treatment.

There is a new promise of finding a multiple sclerosis treatment and restoring the affected cognitive functions through damaged myelin repair. Due to the National MS Society’s extensive efforts, we are steps closer to stop the progression of multiple sclerosis. Some initiatives currently underway include clinical trials to stimulate the brain’s natural capacity to repair itself, tests on the ability of stem cells to treat multiple sclerosis, research into the ways to protect the nervous system, and development of methods to monitor the successful repair.

Stem cell therapy is also growing in popularity, and numerous advancements have been made over the last decade. Although much more research is needed to determine the effectiveness of stem cell therapy in multiple sclerosis, some studies have already found that transplanting stem cells to the brains of mice prompted myelin repair, while injecting stem cells into the spinal cord allowed mice to recover from MS-like symptoms.

Lastly, the Society is looking into means to protect the nervous system with medications and supplements, including ibudilast, lipoic acid, and phenytoin.

As the National MS Society continues to run clinical trials and conduct more research, there’s hope that one day multiple sclerosis can be better managed and even cured.

In multiple sclerosis, brain damage may repaired by blocking a certain brain enzyme

In multiple sclerosis (MS), brain damage may be repaired by blocking a certain brain enzyme. Coming from researchers at Oregon Health & Science University, the findings might have large implications not only for multiple sclerosis, but also for premature birth complications and other disorders. Continue reading…