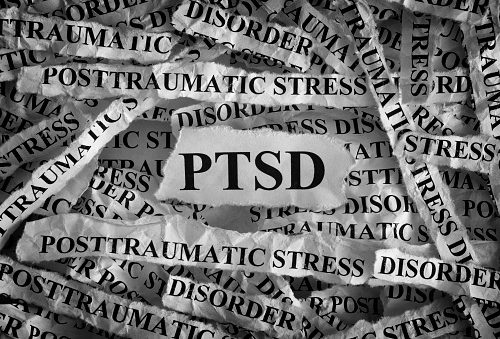 Multiple sclerosis drug Gilenya may provide a clue for possible new PTSD therapy. Based on the study conducted on mice, the researchers uncovered a new therapeutic approach to treating post-traumatic stress disorder (PTSD).

Gilenya is a sphingosine-1-phosphate-receptor modulator, which is commonly used as a treatment for multiple sclerosis. The researchers found that fingolimod (a generic name for Gilenya), or FTY720 as it code name goes, has beneficial effects for the central nervous system.

The study has shown that FTY720 enters the nucleus where it is phosphorylated (meaning, a phosphate group is added) by a protein sphingosine kinase 2 (SphK2). The resulting nuclear FTY720-P binds and inhibits class I histone deacetylases (HDACs), enhancing specific histone acetylations.

The researchers suggest sphingosine-1-phosphate and SphK2 play specific roles in memory functions, and FTY720 may not be an ideal agent for treating PTSD due to its side effect profile.

The study findings could be a start for developing new agents with greater specificity for the nuclear anti-HDAC action in the hippocampus that could potentially lead to useful adjuvant therapy to help facilitate control of aversive memories.

Experiencing a life-changing event or a serious medical condition can lead to PTSD, so a person living with multiple sclerosis could develop the disorder. Multiple sclerosis is a chronic disease of the nervous system in which the body’s own immune system begins to attack myelin, the protective coating around the nerves and spinal cord. Mylin destruction prompts the symptoms to arise.

The Diagnostic Manual of Mental Disorders of the American Psychiatric Association defines a traumatic event as “a situation where the person experienced, witnessed, or was confronted with an event where there was the threat of or actual death or serious injury.” This event could also be something that threatens a person’s wellbeing, which makes multiple sclerosis fit that definition.

In one study that looked at PTSD and multiple sclerosis in 58 MS patients, 16 percent met the criteria for PTSD, which is a higher rate than the general public.

In an alternative study, consisting of 126 people with multiple sclerosis, researchers found that the level of disability a patient experienced was associated with how strong a person’s PTSD symptoms were.

Living with PTSD and multiple sclerosis can be challenging, as PTSD patients often experience depression, which has been shown to worsen outcomes in chronic illness. It’s important that patients seek help for their PTSD not just to better manage their mental health, but to even improve multiple sclerosis management, too.