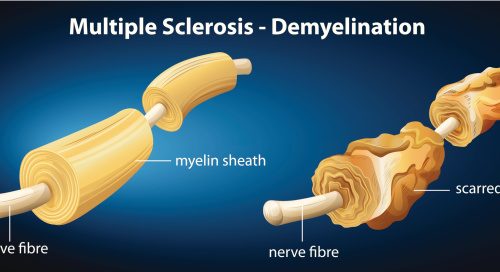 Having a disabling disease can making living very difficult, especially when the source of the disability is not well understood. Some diseases come in the form of your body attacking itself. This type of disease is called an autoimmune disorder, and multiple sclerosis (MS) is a result. MS is thought to occur due to the destruction of the protective covering around nerve fibers or axons, called myelin sheaths. This leads to communication problems between the brain and the rest of the body, with permanent damage to these nerves being an eventuality. However, new research in this domain has found that loss of spinal nerve fibers may not be the only cause of disability in multiple sclerosis patients.

Autoimmune disorders like MS result from immune cells becoming confused and thinking that normal structures in the body are actually foreign, leading them to attack. The myelin covering nerve fibers can be compared to that of the protective coating found on electrical wires—if it were to get damaged, the electricity would not reach its destination. When the protective myelin is damaged and the nerve fiber exposed, the message that was traveling from the brain along the nerve may be slowed or blocked. Multiple sclerosis is thought to develop in people due to a combination of genetics and environmental factors. Signs and symptoms of the disease may differ greatly from person to person depending on the location of the affected nerve fibers. What follows are some of these symptoms:

Researchers from the Queen Mary University of London have completed an extensive study looking at the reasons why multiple sclerosis develops by directly examining the spinal cords of 13 people with MS and five healthy control subjects. They found that a cross section of the spinal cord was not a good predictor of the disease for axonal loss, changing what was previously thought about the disease.

“The nature of the spinal cord as a highly organized and largely autonomous network needs to be appreciated. We need to identify other factors which—over and above axonal loss—determine the collapse of the spinal cord network and lead to the functional deficits seen in MS. In spinal cord trauma, people with less than 10% of their spinal cord axons may still be able to have useful lower limb movement, but in MS, patients with as much as 40% of their axons retained, as shown in our study, are almost invariably wheelchair bound. So, there is clearly something happening here which we’ve yet to understand.”

This is revelatory news in the field of multiple sclerosis research, as now the search for other factors that cause chronic disability in MS can begin.