Home » General Health » How much sun exposure is needed for good health? 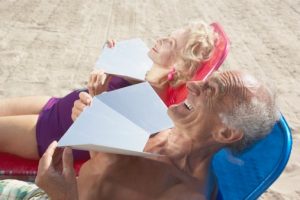 The sun is the best natural source of vitamin D, which can help reduce blood pressure while improving treatment for various diseases, however, too much exposure to solar radiation can result in potentially serious skin damage. Is there a certain amount of time spent in the sun’s rays that can allow you to reap its benefits without causing skin damage?

Spanish researchers aimed to discover this in a recent study that examined how much sun exposure was necessary to obtain the daily recommended dose of vitamin D. The team also analyzed the amount of time it took for sun exposure to cause skin damage, and compared these numbers to determine the optimal amount of time needed for an individual to benefit from exposure without risking their health.

The research was conducted by the Solar Radiation Research Group at the Polytechnic University of Valencia, and lead author of the study Maria Antonia Serrano explained the driving force of their research, stating, “In Spain, despite being a country with many hours of sunlight, several articles have reported a high percentage of vitamin D deficiency among various strata of the Spanish population.” Serrano and her colleagues set out to determine how much ultraviolet radiation was needed for an individual to obtain the equivalent of 1,000 IUs of vitamin D in a region like Valencia, which has extensive sun exposure throughout the year. They also wanted to determine at what point UV radiation would begin to contribute to the development of sun erythema—damage that causes cancer and aging of the skin.

Ultraviolet solar irradiance (UVER) was measured around midday—between 12:30 p.m. and 1:30 p.m.—for one month in winter, one in spring, one in summer, and one in fall. The study found that the amount of time it took for individuals with skin type III (the most common in Spain) to obtain the recommended dose of vitamin D varied based on season, as did the amount of time they could spend in the sun without causing skin damage.
In the height of summer, no more than 29 minutes of sun exposure was recommended, while the winter months allowed the same person to remain in the sun for up to 150 minutes. However, to obtain the recommended doses of vitamin D, ten minutes was sufficient in the summer while 130 minutes was required in the winter.

These results show that there is a safe range of sun exposure that varies by season that allows you to obtain the potential benefits associated with the sun’s rays without damaging your skin. However, it is important to note that these numbers may change by region and the amount of UV radiation your locale receives yearly. It also varies based on your skin type, meaning that it may take more or less time to either absorb vitamin D or damage your skin based on where you live and your complexion.

5 Tips to Protect Aging Skin from the Sun