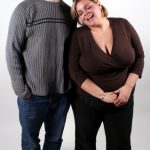 Romantic relationships are bound to have their ups and downs, after all there is no such thing as a perfect relationship. Did you know however, that the mixed weight theory has thin men and fat women dealing with quite a bit of conflict?

A new study has found that women who have experienced weight gain and are married to thin men are more likely to have unhappy marriages. They reported having greater conflict with their partners on a daily basis and less support. The research seems to suggest that personal dynamics in mixed-weight situations might be important for partner’s mental well-being and overall health.

The study was published in the Journal of Social and Personal Relationships and adds to other literature on mixed-weight status in romantic relationships that suggest calories count. Many of the previous studies focused on body image as opposed to relationship conflict.

Researchers at the University of Arizona, the University of Puget Sound, as well as Hanover College worked together to examine mixed-weight relationships. They discovered that women who consumed fewer calories and had a lower body mass index were in happier relationships, while women who had a higher BMI were dealing with much more conflict with their spouses and felt less happy. Interestingly, when mixed-weight couples eat together it appears as if they fight more than when they have meals separately.

Relationship Dynamics of Being Fat

The researchers say that fat plays a deeper role in relationship dynamics than some people realize. They say heavier women sometimes report lower relationship quality due to their perceived evaluations from their husband’s. When they have this perception of how their body is being evaluated, they get so upset that they engage in unhealthy behavior such as consuming more calories or more food that is high in fat. In some cases women suppress their emotions when they are dealing with weight gain issues, especially if they are associated with negative comments from their partner. Suppressing emotions can be unhealthy. The authors of the study say this is where women become really conflicted because they are caught between expressing their emotions and potentially receiving more negative criticism from their partner or suppressing their emotions and keeping everything bottled up inside.

The study also points out that couples had less conflict when the overweight person felt the partner was supporting her efforts to exercise and eat a healthier diet. The researchers say this shows that even though mixed-weight relationships are at risk of experiencing more conflict, there are ways to overcome and reduce the conflict.

Fat and Your Emotional State

Psychologists say whether it is the female or male in the relationship that has the weight problem, it is important to communicate in a calm and loving manner. The person who is struggling needs to feel like you are rooting for them and not criticizing them. The experts say the worst thing you can do is nag or judge the person who is struggling to eliminate those extra calories from their menu. They say support usually equals success when it comes to dieting or quitting a bad habit.