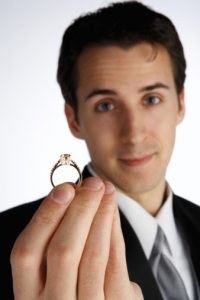 The average age of marriage in the United States is now 29 for men, and that’s good news – for their bones.

A new study published in Osteoporosis International found that getting married after the age of 25 gives men stronger bone density in their spines compared to those who married at a younger age. This finding may have important implications for the prevention of joint aging and stiffness later in life, when bone strength naturally declines.

Waiting To Wed, The Stronger The Bones

The research was done as part of the Midlife in the United States Study, and includes data from more than 600 adults aged 25 to 75, from across the country. The subjects were first interviewed in 1995 to 1996, then re-interviewed in 2004 to 2005, when researchers also obtained their hip and spine bone-density measurements. Bone density is a particularly important measurement for aging adults, as it’s associated with osteoporosis risk.

RELATED READING: Men Vs. Women: Men At Higher Risk To Die From Cancer

The findings mark the first time that bone health has been linked to marital history and quality, according to the study researchers from the University of California in Los Angeles. But as we face the worries of aging, such as joint stiffness and hip problems, it helps to know which social aspects of our lives – along with the physical ones like exercise and good diet – can improve the strength of our bones.

Along with men who married at younger age, those who experienced marital disruptions like divorce or death, as well as those who never married, also showed weaker bone density compared to middle-aged men in stable marriages or marriage-like relationships.

The association didn’t quite hold for women, however. The researchers didn’t find a link between marriage (or similar relationships) and bone health for the female subjects, but did find that women who felt appreciated and supported by their partners had better bone strength than those who didn’t. A little TLC goes a long way, gentlemen!

For each year they were married before the age of 25, the researchers found a significant reduction in bone density in the men’s spines. They attributed this reduction to the effects of the stress of providing for a family at a young age. It’s not hard to imagine that stress could also be a factor in the state of the spines of men who’ve dealt with the end of a marriage or death of a partner, or women in relationships where they lack emotional support.

However, the study does have some limitations. The measurements of spinal and hip bone density weren’t longitudinal, which means that the results show a correlation between marital status and bone health, but can’t prove a cause-and-effect relationship. The study also didn’t reveal the biological reasons for the connection – the researchers plan to study that next.

The findings add more proof to the already existing evidence that marriage affects health for men and women in different ways – men in the study were healthier simply by being in established relationships. For women, the quality of the relationship was what mattered for bone health. With North America’s aging population, that information can be valuable when it’s for better or for worse –bad backs, joint stiffness and all.