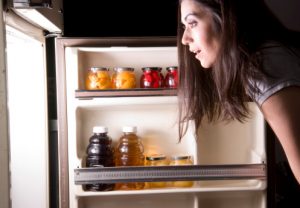 Memory has been found to be impaired by midnight snacks – which may also negatively affect learning and brain physiology. In a study conducted on mice, the researchers found that eating during typical sleeping hours changes the brain physiology. Furthermore, it causes a deficiency in the type of learning and memory controlled by the hippocampus.

First author Dawn Loh said, “We have provided the first evidence that taking regular meals at the wrong time of day has far-reaching effects for learning and memory. Since many people find themselves working or playing at times when they’d normally be asleep, it is important to know that this could dull some of the functions of the brain.”

Although the findings have been uncovered in mice, they have not been confirmed in humans as of yet, but the researchers point to the fact that shift workers perform poorer on cognitive function tests, meaning their findings may hold truth in humans.

The researchers also found that some learned behaviors are more affected than others. Mice that were continuously fed during sleeping hours had great difficulty recognizing objects they once were familiar with. Long-term memory and the ability to recognize novel objects are governed by the hippocampus.

Professor Christopher Colwell from the Department of Psychiatry and Biobehavioral Sciences at UCLA added, “Modern schedules can lead us to eat around the clock, so it is important to understand how the timing of food can impact cogitation. For the first time, we have shown that simply adjusting the time when food is made available alters the molecular clock in the hippocampus and can alter the cognitive performance of mice.”
Aside from affecting learning, eating late at night also disrupts sleep patterns. The researchers found that one night of eating can lead to the loss of a full normal day/night difference in relation to the amount of sleep. Eating at night fragments the sleep, causing mice to nap more throughout the day to catch up for lost sleep.

For now, it may be wise to keep eating during normal waking hours and hold off on those late-night snacks if you want to maintain your learning abilities.

Role of the hippocampus in memory and spatial navigation

As mentioned, the hippocampus plays a role in memory and spatial navigation, also known as recognition memory. Recognition memory is comprised of two processes: first is the recognition of something through vivid details during the initial encounter and second is the familiarity, which is the sense of previously encountering that something.

Lead author of the study Maxwell Merkow said, “There has been a longstanding debate in the field of recognition memory about how the human hippocampus contributes to our ability to recognize. One segment of the scientific literature contends that neural activity in the hippocampus only contributes to recollection, whereas some believe hippocampal activity supports both recollection and familiarity. Our study aimed to get to the bottom of this.”

The researchers wanted to uncover the role of the hippocampus in recognition and familiarity, so they tracked neural activity in 66 patients undergoing testing for epilepsy. They conducted memory games and found that when patients correctly identified a word, the hippocampus activity increased. Lower activity was seen when patients failed to remember the word or when they saw a new word.

Merkow concluded, “This work directly addresses the issue of where in the brain recognition takes place. We now need to focus our efforts on how these processes occur.”

Are these five habits hurting your memory?