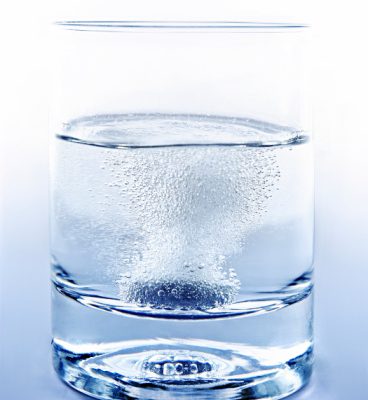 When your upset stomach has you reaching for a glass of water and a fizzy tablet, try some ginger tea instead.

If you regularly take medication such as dissolvable aspirin, Alka-Seltzer or other fizzy types, you may want to switch to a different form of medication. You could be putting yourself at risk for heart disease.

Researchers from the University of Dundee and University College London have found that individuals taking dispersible forms of medication – pills and powders that dissolve in water or easily under the tongue – were at an increased risk of heart attack, stroke and other vascular-related death. The high salt content of this form of medication is to blame.

The researchers found that individuals taking fizzy versions of painkillers, vitamins and other common medications would exceed the recommended daily limit for sodium if they took the maximum dose of the medication.

The researchers suggest that these fizzy types of medication should list their sodium content on the packaging, similar to food labelling, so that consumers are made aware of the high levels and can make an informed decision on whether or not to take them.

RELATED READING: Could Your Sweet Tooth Cause Cardiac Arrest?

The study was conducted between 1987 and 2010, tracking patients for an average of seven years. The researchers followed more than 1.2 million patients and compared those that were taking effervescent, dispersible and soluble medication that contained sodium with patients who were taking non-sodium forms of the same medication.

During the study period, 61,000 cardiovascular events, including heart attack and stroke, occurred. Variables that could have affected the outcome, such as body mass index (BMI), smoking, alcohol use and other medication use were taken into account. The results showed that there was a 16 percent increased risk of heart attack, stroke or cardiovascular-related death in the patients that were taking the high sodium fizzy type medication compared with those that were taking the non-sodium form.

Additionally, patients that were taking the medication containing sodium were at an increased risk of developing high blood pressure –seven times more likely – and had an overall death rate that was 28 percent higher than those taking the non-sodium containing medication.

Limit Use Of These Medications

The American Heart Association reports that one in three Americans will be diagnosed with high blood pressure and this may be due to diets high in sodium. To reduce the risk, reduce your sodium intake in foods and medications.

The study researchers advise doctors and pharmacists to recommend the use of these types of medication with caution. They should be taken as infrequently as possible to avoid negative health consequences.