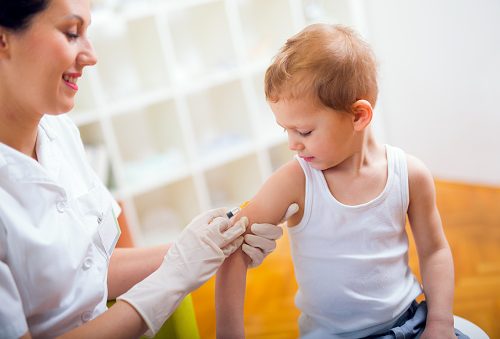 For the study, the authors searched medical literature reports for measles outbreaks in the U.S. since it’s been declared to have been eliminated, along with studies about vaccine delay or exemption.

The researchers identified 18 studies regarding measles containing 1,416 measles cases and over half that had no history of measles vaccination. Of 970 studies containing detailed vaccination histories, 574 cases were unvaccinated despite being eligible and 71 percent of these had nonmedical exemptions from the vaccine.

Among 32 reports of whopping cough (pertussis) outbreaks, the five largest epidemics reported in the U.S. had large amounts of unvaccinated or undervaccinated individuals. However, a few outbreaks were also seen among the vaccinated populations as well, pointing to a reduction in immunity.

The authors wrote, “This review has broad implications for vaccine practice and policy. For instance, fundamental to the strength and legitimacy of justifications to override parental decisions to refuse a vaccine for their child is a clear demonstration that the risks and harms to the child of remaining unimmunized are substantial. Similarly, central to any justification to restrict individual freedom by mandating vaccines to prevent harm to others is an understanding of the nature and magnitude of these risks and harms. However, the risks of vaccine refusal remain imperfectly defined, and the association between vaccine refusal and vaccine-preventable diseases may be both population- and disease-specific.”

An alternative study found that gaps in vaccinations of the measles put one in eight children at risk for the illness. Measles is highly contagious and can lead to pneumonia, encephalitis, hospitalization, and on rare occasions, death. Measles can be transmitted through direct contact or through droplets that can spread through the air. Measles is one of the most contagious of the diseases that can be prevented through vaccine, so vaccination is crucial for measles prevention.

The study suggested that nearly nine million children are at risk for measles because they have not been vaccinated or only received one dosage of the two. Some children, due to medical reasons or age, cannot be vaccinated, which increases their risk as well. Other children do not get vaccinated due to their parents’ choices or religious reasons.

Lead author Robert Bednarczyk said, “Although we eliminated continuous measles transmission in the United States about 15 years ago thanks to the effectiveness of the MMR vaccine and robust vaccination rates, these study results show that we can’t get complacent. While we currently have overall immunity in the population that should prevent sustained measles transmission, if the virus is introduced, there is the potential for large outbreaks. This is because there are clusters of unvaccinated children in some communities, which could allow a large outbreak to occur with spread to similar communities.”

Dr. Bednarczyk recommends all children receive the proper dosages at the appropriate ages in order to protect themselves from the measles. The first dosage of the measles and mumps vaccine is given at age 12 to 15 months and the second one occurs at the age of six. Children are expected to have theor vaccination prior to beginning school, but some children cannot receive the first dose due to a medical reason. Some states may also exempt children from vaccination due to personal or religious reasons.

Dr. Bednarczyk concluded, “We know some parents have concerns about vaccines and may want to avoid or delay vaccination, or follow an alternative schedule than the one recommended because they’re concerned about the safety of the vaccine. I n fact, the vaccine is very safe, while not vaccinating is highly risky, leaving their children – and others – vulnerable to a serious illness that can cause a large number of complications. Currently, these children are protected because of the high vaccine coverage of the population, but that will change if we begin having more outbreaks and the percentage of children vaccinated declines.”

Early signs and symptoms of measles

Measles is a viral infection of the respiratory system. The measles virus is highly contagious and is found throughout the world. The virus is transmitted through contact with infected mucus and saliva. As the virus can live on surfaces for several hours, releasing the virus into the air by coughing or sneezing of an infected person can spread the disease. Continue reading…