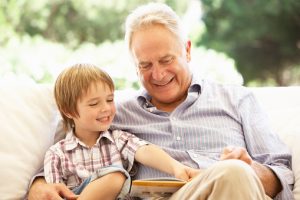 One of the greatest joys in a parent’s life is to raise their children to be kind and loving individuals, giving them love and support as they grow into adults. When your children eventually start a family of their own, spending time with your grandchildren can be some of the best years of a person’s life.

However, according to a new study, grandparents may be inadvertently putting their grandchildren at risk for negative health consequences, especially in areas of weight and diet.

Looking closer at the impact grandparents have

Researchers from the MRC/CSO Social and Public Health Sciences Unit, University of Glasgow have recently completed a review that looked at 56 studies from 18 different countries which involved grandparents who were considered part-time caregivers to their grandchildren.

The aim of the study was to identify potential risks to a child’s health that may be incurred by the increased presence of grandparents in a child’s life.

It was found that a health-related impact was occurring through “treating,” overfeeding, and a lack of physical activity. Additionally, smoking around children was seen to enforce negative behavior, as well as increase exposure to second-hand smoke.

Much of these factors are of significant concern in the early lives of children. Many studies have found evidence suggesting that exposure to risk factors in childhood increases an individual’s likelihood of cancer morbidity or mortality in adulthood.


“While the results of this review are clear that behavior such as exposure to smoking and regularly treating children increases cancer risks as children grow into adulthood, it is also clear from the evidence that these risks are unintentional. Currently, grandparents are not the focus of public health messaging targeted at parents and in light of the evidence from this study, perhaps this is something that needs to change given the prominent role grandparents play in the lives of children,” said lead author of the study, Dr. Stephanie Chambers.

This issue becomes more and more prevalent as social conditions change—as seen with more women entering the workforce than previous times. Additionally, the increase of single parents and ever-rising costs of raising a child has led to an increased role of grandparents during childhood.

“From the studies we looked at, it appears that parents often find it difficult to discuss the issues of passive smoking and over-treating grandchildren. Given that many parents now rely on grandparents for care, the mixed messages about health that children might be getting is perhaps an important discussion that needs to be had,” said Dr. Chambers.