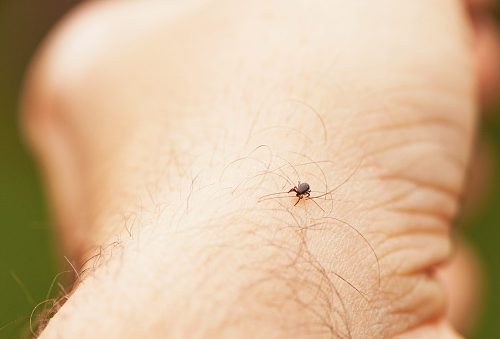 Lyme disease and the flu (influenza) may appear similar in the beginning, but they take two different pathways as they progress. The flu is most common during the colder months – October to March – and Lyme disease hits its peak during the hot summer months.

A zoonotic disease, meaning it is spread by animals or insects, Lyme disease is transmitted through the black-legged tick or deer tick.

Influenza, on the other hand, is caused by a virus and thus it cannot be treated with antibiotics.

Anyone at any age is at risk of developing the flu or Lyme disease. The biggest difference between the two is that one is contagious (influenza) and the other is not.

Misdiagnosis is not uncommon for patients with Lyme disease, as it can mimic other common illnesses. Lyme disease’s trademark is a bull’s eye rash known as erythema migrans, which clearly signals it is Lyme disease.

Can Lyme disease cause flu-like symptoms?

Symptoms of Lyme disease in its early stage consist of fever, chills, headache, and muscle and joint pain. These symptoms also take place if you have flu. Because the flu is somewhat uncommon during the summertime, if you start experiencing flu-like symptoms, it could actually be an indication of Lyme disease. Take note, if you’ve been spending a lot of time outdoors, your risk of contracting Lyme disease may be higher.

It’s important to diagnose Lyme disease early on so the antibiotic treatment can start early on to target the infection. If you wait too long, other complications may arise.

Influenza is a seasonal illness, taking place predominately during the late fall and winter. The annual rate of influenza worldwide is five to 10 percent in adults, and 20 to 30 percent in children. During the peak flu season, hospitals can be overwhelmed with patients. The impact of pandemic results in high numbers of absenteeism and productivity losses.

There are roughly 30,000 Lyme disease cases reported annually, but it’s not an accurate reflection, as these are only the incidences reported to the Centers for Disease Control and Prevention (CDC).

Early signs of Lyme disease include fever, chills, headache, muscle and joint pain, swollen lymph nodes, and erythema migrans rash, which looks like a bull’s eye. As the disease progresses, symptoms can worsen into severe headache and neck stiffness, with additional rashes, arthritis accompanied by severe joint pain and swelling, muscle loss in the face, intermittent pain in the tendons, joints, and bones, as well as heart palpitations or irregular heartbeat, dizziness or shortness of breath, nerve pain, shooting pain, numbness or tingling, and problems with short-term memory.

Difference between flu and Lyme disease: Causes and transmission

Lyme disease is caused by a bite from the Ixodes scapularis, or deer tick. These ticks are not inherently infected with Lyme disease, but rather they get it from feeding on an affected animal. These ticks can be found in wooded lands and prefer damp areas underneath the trees. Because ticks are so tiny, it is difficult to notice that they are on you, let alone that they are biting you, so it’s important that you cover your body and check yourself every so often if you are going out for a hike.

There is some debate about how long it takes for a tick to infect a person. Some experts suggest it’s up to 24 hours from attachment, and others believe it’s even less than that. Essentially, the longer a tick is attached to you, the higher your risk of Lyme disease is.

The flu is transmitted from person to person and can travel up to six feet. The flu travels through droplets when a person coughs, sneezes, or talks. The transmission takes place when these droplets enter the mouth or nose of another person.

The flu may also be transmitted when you touch a contaminated object and then touch your nose or mouth. There are three main strains of influenza – A, B, and C – and the annual vaccine combines different varieties of circulating strains in order to offer optimal protection.

The flu is highly contagious, and a person can infect others even being unaware of having flu. The flu is most contagious between one day prior to the symptom onset and up to seven days of becoming sick.

Risk factors for the flu include being under the age of five or over 65, being pregnant, being obese, residing in nursing homes, having asthma or neurological and neurodevelopment disorders, chronic lung disease, heart disease, blood disorders, endocrine disorders, kidney disorders, liver disorders, metabolic disorders, and having a weakened immune system.

If the flu is left untreated, it can result in complications and can even be life-threatening to certain age groups – seniors, for example. Complications related to the flu are bronchitis, pneumonia, aggravation of other conditions, sinus infection, and ear infections.

Risk factors for Lyme disease include spending long hours in grassy, woody areas (especially in the East, Midwest, and West coast), having exposed skin as ticks can easily attach themselves to bare skin, and failing to remove ticks properly once detected. Furthermore, the quicker you remove a tick from your skin, the lower your risk of contracting Lyme disease will be.

If Lyme disease is caught early, antibiotics will be given immediately to reduce complications, but if treatment is delayed, chronic complications can arise, including fatigue, arthritis, joint pain, headaches, short-term memory problems, numbness, Bell’s palsy (facial paralysis), heart problems, including slow or irregular heartbeat, and depression, which can be set off by living with the complications of Lyme disease.

Diagnosing Lyme disease involves looking for the erythema migrans rash, which is reported in 70 percent of Lyme disease cases. Your doctor will also evaluate your symptoms and confirm the diagnosis with blood work.
For Lyme disease treatment, your doctor will put you on a regime of antibiotics, which may be taken for several weeks. It’s important that you completely finish your antibiotics, even if you start feeling better. Take note that some antibiotics may make your skin more sensitive to the sun, so you should avoid being out in the sunlight for prolonged periods of time.

The main treatment recommendations for the flu are plenty of rest and the replenishment of fluids, especially if the patient has diarrhea or is vomiting. In some cases, your doctor may prescribe antiviral medications, usually if the flu is quite severe. If these medications are taken fairly soon, the duration of the illness will be shortened. It’s important to note that influenza medications do not cure the flu, but simply shorten its duration. Some of the drugs, however, do come along with side effects, which may be reduced if you take your medication with food.

The first line of defence against the flu is getting the annual vaccination. To reduce your risk of contracting the virus or spreading it, you should wash your hands frequently and thoroughly or use alcohol-based sanitizers when soap and water are not available. Cover your coughs and sneezes with your sleeve or a tissue, and avoid large crowds, especially during the flu season. If you are sick, take the time to stay home and avoid contact with other people to prevent the transmission of the infection.