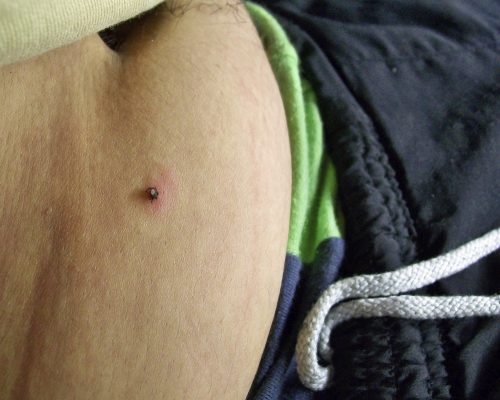 Experts are concerned that if parents of children with autism believe that Lyme disease is the cause they will seek out long-term antibiotic care.

Senior author Armin Alaedini said, “Unless a child has been diagnosed with Lyme disease or another infectious disease, our findings don’t support the idea of putting autistic children on antibiotics.”

Autism is a brain disorder that hinders a child’s ability to communicate or interact socially.

Lyme disease is brought on by bacteria transmitted through a tick bite.

A second test was conducted and none of the children tested positive for Lyme disease. “We did the testing by the CDC-recommended two-tier testing and didn’t find any of the children to be positive. Our sample size is large enough that these findings can rule out a high prevalence of Lyme disease in children with autism spectrum disorder,” explained Alaedini.

Dr. Kenneth Bromberg, chairman of pediatrics and director of the Vaccine Research Center at the Brooklyn Hospital Center, commented, “This study points out the problems with Lyme serology. Sometimes, a single blood test doesn’t do it. And, in any study of Lyme disease, you have to look critically at how they tested. When these researchers did the CDC-recommended testing, they couldn’t find the prevalence of Lyme that others found.”

Bromberg concluded, “Avoiding Lyme has nothing to do with autism, it’s to avoid Lyme. Wear protective clothing and do tick checks when you come indoors.”

Previous research had found a link between Lyme disease and autism, suggesting that up to 90 percent of autistic children test positive for Lyme disease. Because the cause of autism is still unknown, much has been speculated about potential causes, including thimerosol filled injections, environmental factors, and – most recently – Lyme disease.

Cofounder of Think Tank Tami Duncan said, “We are not saying that Lyme disease is the exact cause of autism for every single child. Let me clarify; what we are saying is that Lyme disease could be an inciting factor that is suppressing the child’s immune system, which would make them more susceptible to heavy metal toxicity, environmental factors, etc. There is a large subset of autistic children in which this is happening. However, most children with Lyme-induced autism cannot begin to heal until this infection is under control. Parents want their children healed of autism.”

Dr. Warren Levin of Vienna, VA, tested 10 children with autism for Lyme disease, and all the children tested positive. Additional research is required to confirm such findings. That’s why The Lyme Induced Autism Foundation is holding fundraisers in order to fund future studies.

Duncan explained, “We would like to fund a study that will test children with autism for Lyme disease to determine what actual percentage of children are infected. Only then will we be able to pull the top researchers and physicians together to come up with some answers.”

If you’re still pondering as to how or why Lyme disease may lead to autism, well, Lyme disease can affect all functions within the body and can increase a person’s vulnerability to environmental factors.

A study by Robert C. Bransfield et. al. explained, “Chronic infectious diseases, including tick-borne infections such as Borrelia burgdorferi, may have direct effects, promote other infections, and create a weakened, sensitized, and immunologically vulnerable state during fetal development and infancy, leading to increased vulnerability for developing autism spectrum disorders.”

Even though there were previous findings to support a link between Lyme disease and autism, new findings debunk such ideas, but ongoing research on larger population groups is still required.

Lyme disease transmitted by ticks reported in nearly half of all U.S. counties

Lyme disease transmitted by ticks has been reported in nearly half of all U.S. counties, according to new research. Lyme disease is caused by the bacterium Borrelia burgdorferi and is transmitted through bites either by the blacklegged tick or the western blacklegged tick. Incidences of Lyme disease have tripled over the last two decades, according to the CDC, making it the most commonly reported vector-borne disease in the U.S. Lyme disease was previously situated in the Northeast and Upper Midwest regions of the U.S., but it is quickly expanding across the country. Continue reading…

Chronic Lyme disease symptoms persist even with prolonged use of antibiotics, according to the research. In a study, researchers found that 12 weeks of antibiotics treatment was ineffective at combating long-term symptoms of Lyme disease among 280 patients. The study is known as PLEASE, and it is the largest study of its kind to follow patients with chronic Lyme disease symptoms. The study aimed to look at the effectiveness of two antibiotic regimes that were both shown to be ineffective. Continue reading…