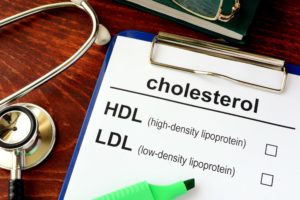 Xiang Gao, director of the Nutritional Epidemiology Lab at Penn State, released a statement along with the results in Neurology, the medical journal of the American Academy of Neurology: “The results may help refine and personalize recommendations for ideal target cholesterol levels.”

Expand the Scope of Knowledge

Chaoran Ma, a nutritional sciences graduate student at Penn State who was involved in the research said, “For our study, we wanted to expand the scope of knowledge in this area by investigating the issue prospectively in a large cohort with multiple LDL cholesterol measurements to capture variation over time.”

The study included 96,043 participants with no history of stroke, heart attack, or cancer when the study began. Participants were measured yearly for their cholesterol level, and their reported incidents of hemorrhagic stroke were confirmed by medical records.

“Traditionally, an LDL cholesterol level of more than 100 mg/dL had been considered as optimal for the general population and lower in individuals at elevated risk of heart disease,” Gao said. “We observed that the risk of hemorrhagic stroke increased in individuals with LDL cholesterol levels below 70 mg/dL. This observation, if confirmed, has important implications for treatment targets.”

The findings of this study may be able to help health care professionals continue to refine guidelines of LDL cholesterol. The key to this study is noting that LDL cholesterol should be balanced. It should not be too high or too low.

“As is true with many things in nutrition, moderation and balance is key when deciding the optimal target level of LDL cholesterol,” Gao said. “You can’t go to either extreme — too high or too low. And if you’re at high risk for hemorrhagic stroke due to family history or risk factors like high blood pressure and heavy alcohol drinking, you may want to be extra careful about LDL cholesterol levels.”